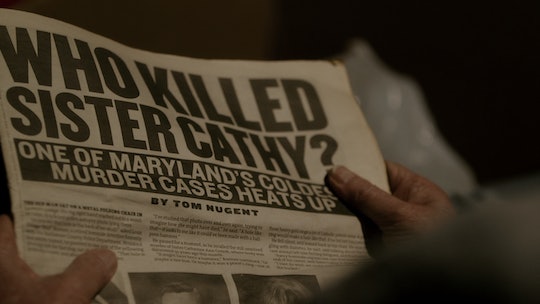 How To Read Tom Nugent's Piece 'Who Killed Sister Cathy?'

One of the key figures in Netflix's The Keepers is journalist Tom Nugent. He was one of the first to delve deeply into the mystery of Sister Cathy Cesnik's disappearance, an unsolved crime that has been haunting locals in Baltimore since it happened in 1969. The case went cold soon after Cesnik's body was found, but when new allegations reached the public in 1994, interest reignited. Nugent wrote an article about the case for the Baltimore City Paper and it's a good place to start if you'd like to know more about what might have happened to Sister Cathy Cesnik. So how can you read Tom Nugent's piece "Who Killed Sister Cathy?"

While the piece doesn't seem to be available on the Baltimore Sun website, don't worry — you won't have to go trekking through back copies of the newspaper like a fevered montage in a 1970s crime drama. The internet is a wonderful place, and Nugent's article is easy enough to find. "Who Killed Sister Cathy?" has been reproduced in full on two sites run by Nugent himself: a Wordpress site helpfully titled the same thing as the article, and the site Inside Baltimore, which has numerous articles about the case written by Nugent as well as the piece that started it all.

Nugent first became intrigued by the case when new information about it hit the public in 1994. Cesnik's death had been a mystery for years, but in the mid-'90s, a former student named Jean Wehner (known at the time as "Jane Doe") filed a lawsuit alleging that she had been sexually abused by Maskell for years while attending Archbishop Keough High School, where Cesnik taught. Wehner also testified that Maskell took her to see Cesnik's dead body as a threat to keep her quiet. It was this claim that inspired Nugent to begin investigating, which in turn inspired other former Keough students to do the same.

The article about the Cesnik case is only one of many pieces Nugent has written in his long career as a journalist. He's worked with countless publications, penning pieces for the Baltimore Sun, Chicago Tribune, New York Times, and People magazine, among many others. Nugent also wrote the book Death at Buffalo Creek about the 1972 West Virginia Flood, which was nominated for a Pulitzer Prize.

Sister Cathy Cesnik's murder has gone unsolved for nearly 50 years, but thanks to the work of people like Tom Nugent (as well as former Keough students and amateur investigators Gemma Hoskins and Abbie Schaub), there's still a chance the truth might be discovered.