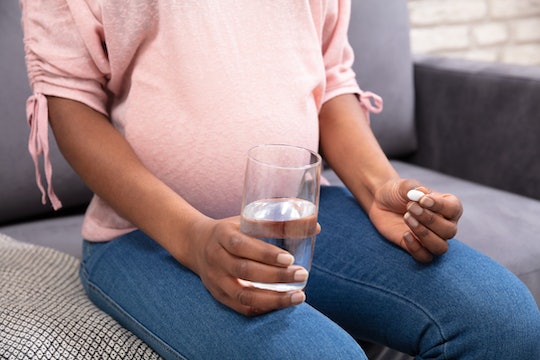 Although everyone hopes for a pregnancy without complications, sometimes health concerns do come up when you're expecting. However, there's often a lot you can do to help manage these conditions. For instance, the one thing you need to know about how to reduce your risk for preeclampsia is something every pregnant human should know about their health. In this instance, the way to decrease your risk involves taking a super common medicine available at most every pharmacy.

For some people, reducing the risk of preeclampsia may be as simple as taking an over-the-counter medication. "Taking aspirin starting in early pregnancy has been shown to reduce the risk of preeclampsia later in pregnancy in women who are at high risk for the disease," Dr. Chavi Eve Karkowsky, OB-GYN with Montefiore Health System, and assistant professor of Obstetrics & Gynecology and Women's Health at the Albert Einstein College of Medicine, tells Romper via email. "This may be because aspirin works as an anti-inflammatory drug, or for other reasons — we're still figuring it out. But large studies have shown that it does reduce the rate of preeclampsia in high-risk women, though it needs to be started early in pregnancy." In other words, even if you are at high risk for preeclampsia, it's possible to work with your doctor and find ways to manage this risk. And for plenty of people, it's as simple as taking an aspirin.

What's so magic about aspirin? Well, it's still kind of difficult to say. "While there hasn’t been a definitive etiology as to the occurrence of the disorder, it is felt that the manner in which the placenta invades the uterine wall during the early stages of pregnancy is done in a dysfunctional manner, leading to a host of chemically mediated pathological effects on the maternal-fetal dyad," as Kecia Gaither, MD, MPH, FACOG, double board-certified in OB/GYN and Maternal Fetal Medicine, Director of Perinatal Services at NYC Health + Hospitals/Lincoln, tells Romper via email. In other words, the complications associated with preeclampsia may be related to some issues with the placenta itself. However, one potential way to help manage the condition is clear. "Baby aspirin, 81 mg daily, given after the first few weeks of gestation is felt to decrease the incidence of this occurrence," says Dr. Gaither.

So now that its causes and potential preventative measures have been explained, what exactly is preeclampsia, anyway? "Preeclampsia is a disease of pregnancy. It happens during the second half of pregnancy, but usually at term (37 weeks onwards), and is a condition where a pregnant woman's blood pressure goes up dramatically," says Karkowsky. "There is also usually some kidney dysfunction, which leads to protein in the urine." In addition, preeclampsia can also negatively impact the mother's liver, blood cells, and brain, and it can even result in seizures and strokes. "This is why it is one of the leading causes of maternal morbidity and mortality worldwide. The only treatment for preeclampsia is delivery," says Dr. Karkowsky. For the most part, the condition will resolve itself with the birth of the baby, so at least you won't have to manage it for too long.

Plus, it's far from an uncommon condition. Affecting about 4% of pregnancies, preeclampsia is a condition that can happen to anybody, explains Karkowsky. There are some factors that make it more likely to occur in certain individuals. "However, it is more common in first pregnancies, in women who have chronic hypertension, in women with multiple gestations, and in women who have other medical conditions such as diabetes or lupus," says Karkowsky. These aren't the only potential indicators for an increased risk of the condition.

"Women who have a history of kidney dysfunction" or autoimmune disease such as thyroid disorders may be at an above-average risk for preeclampsia as well, says Gaither. Because the risk factors for preeclampsia can be so nuanced and individualized, it's best to speak with your doctor to get your own risk assessed.

So although facing your risk of preeclampsia can be a bit intense, remember that the condition is manageable for many people. As with any health info, it's best to visit your doctor to get a totally personalized assessment of your potential for the condition, as well as individualized treatment options. Even if your doctor does find that you're at an increased risk for preeclampsia, simple methods of treatment such as taking a baby aspirin may help reduce those risks. And for the most part, preeclampsia will resolve with the birth of the baby anyway, so you only have to deal with this condition for a few weeks or months at most.

More Like This
Can You Bowl While Pregnant? Experts Weigh In
Considering Getting A Tattoo While Pregnant? Here’s What To Know
What You Need To Know About Bed Rest & Oral Sex
Pitocin Induction: What It Is & The Play-By-Play