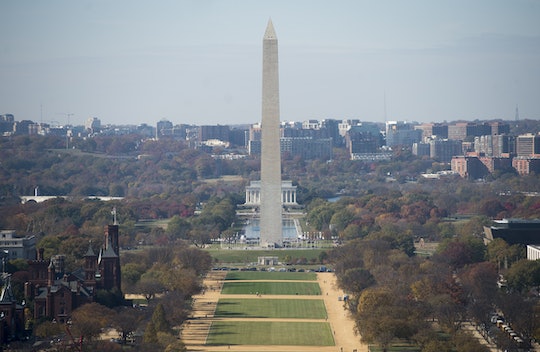 How To Register For The DC Women's March

It all started with a Facebook event created by Teresa Shook from Hawaii. Now it's grown into the largest protest against the election of Donald Trump to the White House. The Women's March on Washington is expected to draw a crowd of hundreds of thousands of protesters to the U.S. Capitol the day after Inauguration Day to publicly show they stand against Trump and his divisive rhetoric against vulnerable communities and Americans, including women, Muslims, immigrants, and others. Here's how to register for the Women's March on Washington and join thousands of other Americans joining together to make their voices heard by the incoming administration.

According to New York Magazine, more than 400,000 have RSVP'd or said they're "interested" in attending the event. The Women's March registration page states about the protest's intention:

In the spirit of democracy and honoring the champions of human rights, dignity, and justice who have come before us, we join in diversity to show our presence in numbers too great to ignore. The Women’s March on Washington will send a bold message to our new administration on their first day in office, and to the world that women's rights are human rights. We stand together, recognizing that defending the most marginalized among us is defending all of us.

The march will kick off on Saturday, January 21 at 10 a.m. at the intersection of Independence Avenue SW & 3rd Street in Washington D.C., according to the march page. Organizers are asking people who want to attend the Women's March to register at Eventbrite to give them an idea of the size of crowds who will make their way to the march. There's also this questionnaire asking attendees for details about their trip to help organizers coordinate logistics, including transportation, and the best way to send out information and updates.

“We plan to make a bold and clear statement to this country on the national and local level that we will not be silent and we will not let anyone roll back the rights we have fought and struggled to get,” Tamika Mallory, one of the march’s organizers, told the Washington Post.

Partners supporting the march include OXFAM, #VoteProChoice, Girls Who Code, Planned Parenthood, Greenpeace, CODEPINK, and GLAAD, among others, representing a wide collection of causes and advocates. According to Teen Vogue, feminist activist Gloria Steinem and actor Harry Belefonte have agreed to serve as honorary chairs of the event.

"In the spirit of democracy and honoring the champions of human rights, dignity, and justice who have come before us, we join in diversity to show our presence in numbers too great to ignore," according to the march's site.

The goal of the march, according to the mission statement from the organizers, is to send a message to the Trump administration on its first day and ban together to create a grassroots groundswell against Trump's stated agenda.