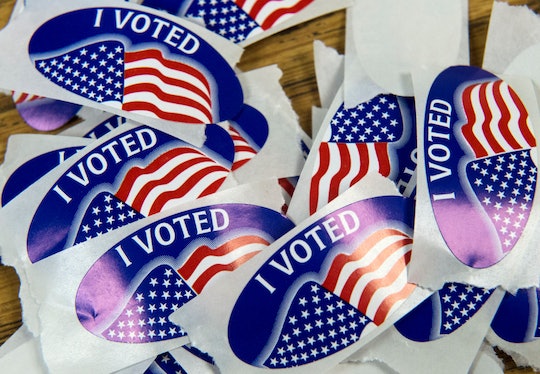 How To Register To Vote, & Why Every Millennial Mom Should

I think it's fair to say that the 2016 U.S. presidential election is the most important election that the planet has ever had, and the threat of a nuclear apocalypse hangs in the balance, right, friends? Fine, maybe that's a touch of hyperbole (a touch is all I'll cop to) but it's a big deal. That's why it's so important for every single eligible American — especially millennial moms — to vote: This election is going to decide the country's course for the next four years, and in case you weren't paying attention, that course is bound to change drastically, no matter who wins. Thankfully, those who don't know how to register to vote are in luck, because it can be done online, right now, at the bottom of this page. I'm literally not even asking you to move a muscle; just a couple of tendons.

Over 30 states now allow online voter registration. Through a partnership with Rock the Vote, Romper is providing the tool to do so below. Residents of states that don't allow online registration will be provided with a document that they can print and mail or hand-deliver to their city or town clerk's office. And while some states allow voters to register on election day, most require voters to be registered by a deadline, some as early as a month before the election. That's really soon, guys. Get it together, OK?

Here's the hard part, though: You have to actually show up to vote on Nov. 8. Voter turnout is absolutely abysmal in the United States; according to the Pew Research Center, only 53.6 percent of eligible voters bothered to vote in the 2012 presidential election. Maybe the other 46.4 percent assumed that their state was pretty solidly blue or red, so their vote didn't really matter, but look at what happened with Brexit. You can't gamble the fate of the nation and your children's future based on your assumptions of how your countrymen will vote. So if nothing else, on Election Day, do it for the kids.

If you're a millennial, please read that last paragraph again, because your turnout? The literal worst. According to NPR, only 46 percent of you millennials showed up in 2012, compared with 72 percent of your grandparents. The crazy part is that there are so many more millennials than the Greatest Generation (69.2 million versus 28 million), so the vote is yours for the taking. Millennials eligible to vote are outnumbered only by Baby Boomers, and just slightly; there are 69.7 million of them. And then there are the 57 million Gen Xers who are probably on the same page as millennials, politically. Look back to the midterm election of 2014, with its historically low turnout, for proof of why it's a bad thing to let the smallest (and oldest) segment of the population run away with the vote. This is why we have a Democratic president and a Republican Congress. This is why we can't get anything done.

Additionally, this is a crucial election for women: Given the very different stances the candidates have voiced on things like immigration, climate change, foreign policy, and healthcare — all issues which will undoubtedly affect the next few generations in a major way — it's vital that women everywhere understand the power they power to shape the future of their kids' lives. In fact, one could argue that, in the years since women first earned the right to cast a ballot, they've never stood to have a greater impact on their kid's futures until now — and for obvious reasons, that's something you need to take advantage of.

So Romper and Romper's sister site, Bustle, are teaming up with a handful of other women's publications for the #OurVoteCounts campaign to get 100,000 women registered to vote between now and Nov. 8. We'll be doing this, first, with this easy-to-use registration tool from Rock the Vote:

Editors from Bustle, Romper, and more than 50 other partner publications will also be on the ground across the country in early October, helping women everywhere get registered in person. Whichever method you choose — whether you register now or wait to meet one of our team members in person — make sure to talk about it on Twitter (using the hashtag #OurVoteCounts) and link to it (rtvote.com/bustle) so your friends and followers can do the same.

Be part of our movement, and then get down to your local middle school on Nov. 8 to earn that free sticker. Your kids will thank you for it (the voting and "deciding the future" part... not the sticker. But probably the sticker too).

More Like This
You Can Schedule Your Kid’s Covid Vaccine Appointment At Walmart
Can The Baby Have That?
Barack & Michelle Obama Shared The Most Adorable Baby Photos Of Malia On Her Birthday
Prince Charles Got All Mushy When He Met Lilibet For The First Time