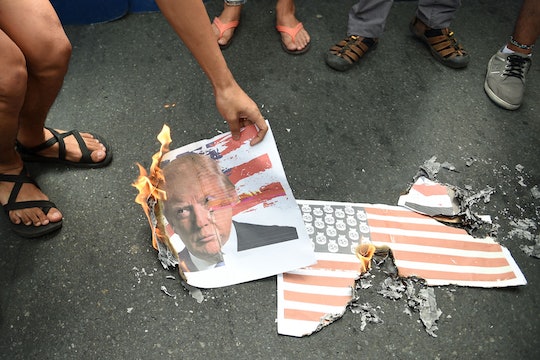 How To Respond To Arguments For Banning Flag Burning

Another day, another Twitter tirade from President-elect Donald Trump. Many believe that Trump's near-constant trolling is meant to distract the nation (and the world) from his controversial cabinet appointments and the numerous international conflicts of interest his business ties represent. Please pay attention to those things, everybody. But we do still have to address the distractions, as well, particularly because the latest tweet, in which Trump threatens would-be flag burners with jail or even stripping them of their citizenship, exemplifies Trump's utter contempt for the First Amendment of the United States Constitution.

Although not a very common practice, it is completely legal to burn the American flag, and yet every couple of decades, the debate over whether it should be a protected right reignites. As we're nearing the end of the year, it's entirely possible that you'll be drawn into an argument about flag burning at your family's Hanukkah gathering or the office Christmas party, so prepare yourself now, because simply shouting "It's legal!" or shaking your head while grumbling that "It's just a piece of fabric" isn't going to cut it. Get ready to anticipate every single argument in favor of banning flag burning, and arm yourself with the proper response to each one.

This one is easy enough. If we make that first leap and criminalize an act just because some find it offensive, it's a slippery slope to criminalizing everything, eventually. How many people out there are offended by South Park, or the Quran, or Trump himself? Should we ban those, too? Hmm, maybe that last one...

It's really not, unless you believe that the flag is essentially a Christian voodoo doll, and every time you take a lighter to it, the dudes on Mount Rushmore get a sunburn. The flag is a symbol, and burning it doesn't harm the United States any more than it hurts someone when you secretly flip them off over the phone.

You can't know a person's true feelings or motives without asking them directly, but many people who burn the American flag do so not in protest of America itself, but what they perceive as anti-American acts by the American government. Acts like, oh, I'm just spitballing here, appointing a white nationalist to a cabinet position. Again, it's impossible to speak for all flag burners, but many are specifically calling out others' anti-American behavior, which would make them pretty damn patriotic, actually.

"It's A Violation Of The Pledge Of Allegiance"

No, really, some people actually use that argument. But the Pledge of Allegiance is actually nothing more than a marketing scheme, not a binding agreement. It's recited primarily by schoolchildren who have no idea what they're saying, and can't legally consent to any sort of contract, oral or otherwise.

"It's Disrespectful To Veterans"

Again, we're attempting to guess at a stranger's motives, but it seems highly unlikely that most Americans who enlist in the armed services do so simply to defend a swath of fabric, no matter how symbolic. Perhaps they wanted to defend their country, or its people, or the principles upon which the nation was founded. But again, the flag is not those things, even if some believe it represents them. They are not one and the same.

"Not All Speech Is Free"

While some argue that flag burning is protected by the First Amendment, others claim that it should be considered an exception. After all, there are laws against libel, threats, and yelling "fire" in a crowded theater, aren't there? But all of the currently accepted exceptions tofree speech have one thing in common: they cause real, demonstrable damage to another person. Libeling someone can present a threat to their livelihood. Inciting a riot causes physical harm to people and property. Burning a flag doesn't harm anyone, unless they happen to be holding the flag at the time.

"Burning The Flag Is Treason"

For this most ignorant of arguments, one need only to quote the great patriot Khizr Khan: "Have you even read the United States Constitution?" In it, treason is defined very narrowly: "Treason against the United States, shall consist only in levying War against them, or in adhering to their Enemies, giving them Aid and Comfort."

And for good measure, a closing argument: The Supreme Court has time and again ruled that banning flag burning would itself be unconstitutional, most recently in the 1990 case of United States v. Eichman. In his affirmation, Justice William J. Brennan, Jr. wrote, "Punishing desecration of the flag dilutes the very freedom that makes this emblem so revered, and worth revering." And if Brennan is too liberal to use as an example, don't forget that just last year, Justice Antonin Scalia said that, although he'd love to jail "every sandal-wearing, scruffy-bearded weirdo who burns the American flag," he accepts that it's unconstitutional. Now if only our president-elect did, too.