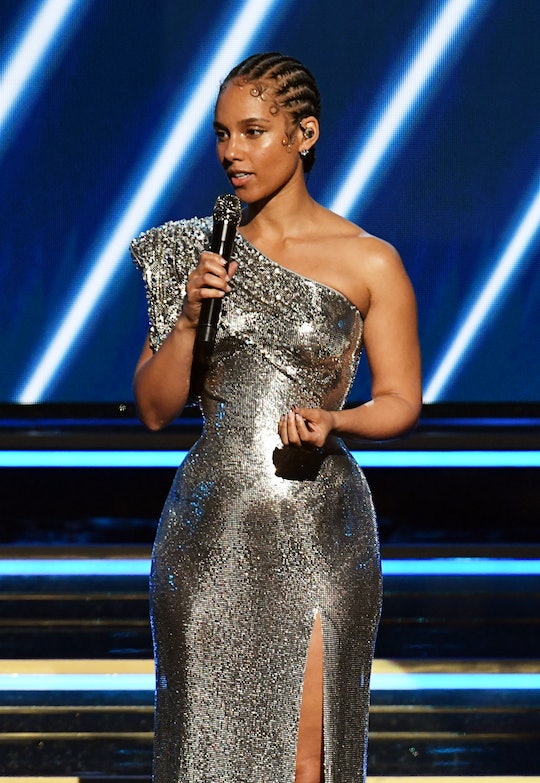 The 2020 Grammy Awards kicked off on Sunday with a heartfelt acknowledgement as people across the country and sitting right in the Staples Center in Los Angeles mourned the loss of NBA legend Kobe Bryant, his daughter, 13-year-old Gianna, and seven others who died in a tragic helicopter accident. For those who missed the first few minutes of the awards show, however, let's take a look at how to rewatch Alicia Keys' touching tribute to Bryant with Boyz II Men.

Just after 8 p.m. EST, the Grammys kicked off with an a cappella performance by the Grammys host and Boyz II Men in honor of the retired Los Angeles Lakers basketball player. Bryant was killed Sunday morning in a helicopter crash — as was his 13-year-old daughter and seven others — in Calabasas, California, The New York Times reported. And the world was still very much reeling from the news.

Keys then started singing "It's So Hard to Say Goodbye to Yesterday" by Boyz II Men before she was joined by the band moments later.

Honestly, the lyrics perfectly captured what so many people in the audience and at home were feeling on Sunday:

It's hard to say goodbye to yesterday/ And I'll take with me the memories/ To be my sunshine after the rain.

"We wanted to do something that could describe a tiny bit how we all feel right now," Keys said. "We love you, Kobe."

The easiest way to immediately re-watch the emotional performance was Twitter. Tons of users had either recorded the tribute and posted it, or re-posted it not long after the Grammys moment aired live. However, the tribute was also published via the CBS YouTube channel not long afterward as well.

Hoards of viewers at home took to Twitter to share their reactions to the bittersweet moment. "Chills. The beautiful tribute from Alicia Keys and Boys II for Kobe, his daughter and the other lives lost today," said one.

Another wrote, "Not gonna lie.... The second Alicia Keys started singing and Boys II Men came out, I started sobbing."

Another chimed in with, "No Alicia Keys and Boys II Men didn’t just do that. I’m hurt... it’s soooooo hard to say goodbye."

My thoughts are with Kobe Bryant's family — as well as the families of the other helicopter crash victims — in the wake of all of the lives lost on Sunday.