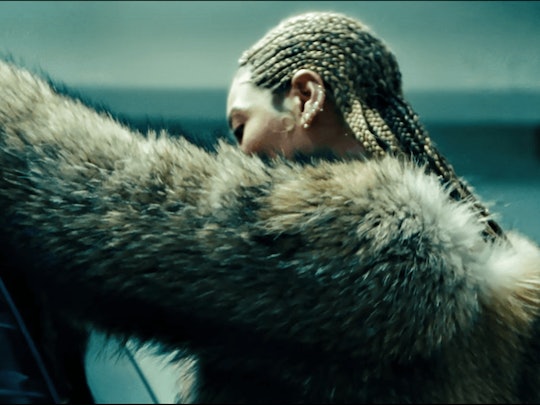 I hope you've got your ice cubes and straws ready, because Lemonade is finally here! After the surprise release of the single and video for "Formation" the day before Super Bowl Sunday, Beyoncé has lit up the music scene once again with the release of the her full sixth studio album, Lemonade. In an unprecedented move by the 34-year-old singer, Lemonade was released as a visual album after airing as a special on HBO Saturday night — and was briefly available to re-watch on HBO's standalone streaming service, HBO Now. But if you missed all the spectacle of Queen Bey's latest album, or you just want to bask in its amazingness again, here's how to re-watch Lemonade.

Lemonade — as both the 12-track album and hour-long album film — was released exclusively on TIDAL, the artist-owned streaming music service led by Beyoncé's husband Jay Z, as soon as the credits for the Lemonade film started rolling after the HBO special aired Saturday night. Some speculated that Lemonade might only be available on TIDAL, but as of Monday morning, it looks like you can get Lemonade for yourself from a couple of other sources besides TIDAL. That said, you're going to have to pony up around $18 out of pocket for the privilege of experiencing the Lemonade film for now.

Beyoncé's semi-exclusive release on her husband's platform has given the fledgling and somewhat struggling TIDAL streaming music service a serious and much-needed boost. After the fiascos that were Rihanna's ANTI album release on TIDAL and Kanye's Life of Pablo album release, having the mighty BeyHive mount their wagons and circle around TIDAL is truly just what the music streaming service needed.

But you're going to need to pay up to watch Lemonade on TIDAL. The streaming music service offers two monthly plans: $9.99 a month for TIDAL Premium and $19.99 a month for TIDAL HiFi, which offers higher quality audio tracks for listeners. Students can get 50 percent off TIDAL subscriptions with a verified college or university email address; TIDAL offers a military discount as well. All TIDAL pricing plans come with a 30-day free trial, but you'll need to register with a credit card first.

Amazon Prime addicts rejoice! Lemonade is available for download and purchase as a physical CD (yes, those are still a thing) from Amazon. Both versions include the audio album and the Lemonade film. You can get the explicit and clean versions of Lemonade on Amazon.

Lemonade just became available on iTunes as of Monday morning and includes both clean and explicit versions. The iTunes purchase includes the 12-track album and Lemonade visual album film.

Right now, it doesn't really matter how you get your Lemonade fix — just get it already! Check out the Lemonade trailer below and get hyped: