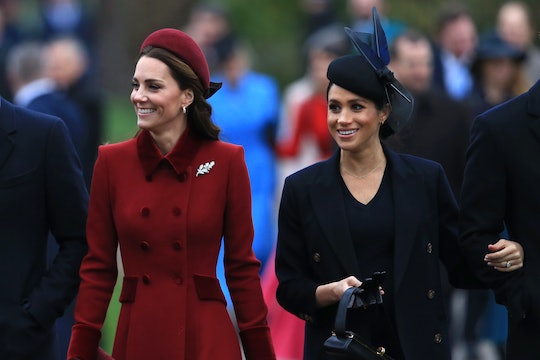 Here's Where You Can Rewatch 'Kate Vs. Meghan: Princesses At War'

Last month, an hour-long documentary special premiered on Channel 5 in the U.K., taking a deep dive into the supposed feud between Kate Middleton and Meghan Markle. On Feb. 5, the doc makes its U.S. debut on TLC, but royals devotees may be wondering how to rewatch Kate Vs. Meghan: Princesses at War on the off chance that they missed it. If you're lucky enough to be reading this only partway through the special's U.S. premiere, then there's good news: you can still set your DVR for the encore airing. The documentary will rerun at 2 a.m. ET on TLC, so you can try to record it then.

There isn't a page for the show set up on TLC's website yet, so it's unclear whether you'll be able to stream Kate Vs. Meghan: Princesses at War online, but it would be a good place to check after it's aired, provided you have a cable subscription. Other than that, you can try to catch it on demand after its premiere at 10 p.m. ET on Feb. 5.

It's been a whirlwind past few years of royal wedding/royal baby fever, with both Princes William and Harry getting hitched since 2011. But rumors of a growing feud between Kate, Duchess of Cambridge, and Meghan, Duchess of Sussex, have swirled ever since Prince Harry's engagement.

The trouble allegedly began when Harry and Meghan embarked on the path toward marriage. While Harry had previously spent a lot of time in Kensington Palace hanging out with his brother and sister-in-law, his increasingly serious relationship with Markle eventually drew him away and into his own life apparently. This part sounds like a common sibling squabble. Maybe William and Kate miss Harry and so they blame Meghan for stealing him away, while Harry and Meghan are simply trying to build their own lives together. But the tension got so bad that rumors of escalation began swirling as Harry and Meghan started wedding planning. One skirmish allegedly left Kate in tears at Meghan's bridesmaid dress fitting, according to the Daily Mail.

Others speculate that the "feud" is really between William and Harry and their poor wives are simply facing the brunt of it in the media because tabloids have been known to pit women against each other. Royal expert Katie Nicholl explains in one of the promos for Kate Vs. Meghan: Princesses at War:

William was quite concerned that the relationship had moved so quickly. I think what was meant as well-intended brotherly advice just riled Harry. Harry is hugely protective of Meghan. He saw that as criticism. He interpreted that as his brother not really being behind this marriage, this union, and I don't think things have been quite right ever since.

It's another understandable position for the younger sibling of the literal future king to take.

Also slated to weigh in on the matter for the special are: Victoria Arbiter, CNN royal contributor; Paul Burrell, former butler to Diana Princess of Wales; Lady Colin Campbell, socialite and royal biographer; Judi James, body language expert; Robert Jobson, royal contributor for NBC; Carol Malone, broadcaster; Eve Pollard, journalist and former editor of the Sunday Mirror and ELLE Magazine; Ingrid Seward, royal biographer; and Kate Williams, historian. With such a deep bench of royal experts, American viewers are sure to get every angle on the matter when the special airs on TLC.