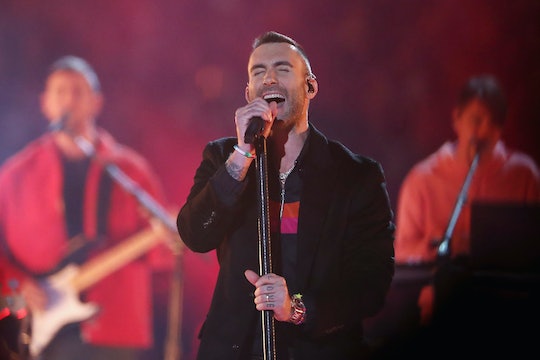 This year's Super Bowl Halftime Show was full of drama leading up to the event, but Maroon 5, Travis Scott, and Big Boi took to the stage to entertain the crowd at football's biggest game of the year (and plenty of fans at home) while the teams rested up and talked strategy in the locker rooms. But if you were scooping up some more buffalo chicken dip or scrounging for pizza while the performance was going on, you'll need to know how to rewatch Maroon 5's halftime show, because you don't want to miss out on it entirely if you're fans of any of these performers.

Missing the halftime show might not be a huge deal for the biggest football fans, but for those who are participating in celebrations or watching the game for the concert at halftime, notoriously funny or entertaining commercials, or truly excellent snacks, missing the halftime show is pretty devastating. That's part of why you're here, after all. Luckily, in the age of YouTube and online videos, rewatching Maroon 5, Travis Scott, and Big Boi isn't much of a challenge.

There are tons of short clips on YouTube, perhaps unsurprisingly, but fans who were in attendance at the Super Bowl also posted the longer videos they shot during the performance.

Travis Scott made a momentary appearance (as did Atlanta native Big Boi) and actually crowd-surfed out, as SB Nation noted. Though there was some speculation that Scott would propose to partner Kylie Jenner during the halftime show, he didn't do anything publicly (much to the dismay of fans). Jenner later posted a video of baby Stormi, who she shares with Scott, watching her dad perform.

Big Boi rode in (really) to perform an Outkast hit, "The Way You Move." But the focus then shifted back to Maroon 5, who finished up the show.

In case you missed it, there was reportedly some difficulty filling the slot this year, as a number of stars said they had no interest in performing as a show of support to Colin Kaepernick, who remains unsigned after choosing to kneel during the national anthem, as per The Hollywood Reporter. There was quite a bit of controversy after Maroon 5 not only agreed to perform, but didn't later back out.

"I think there are plenty of people — a lot of the players, to be honest — who support Kap and also do their job for the NFL," the band's keyboardist, PJ Morton, told People. "I think we’re doing the same thing. We can support being against police brutality against black and brown people and be in support of being able to peacefully protest and still do our jobs. We just want to have a good time and entertain people while understanding the important issues that are at hand."

If you'd rather go straight to the source, you can also rewatch the halftime show on the NFL's website. The league has posted the full video of the performance, so you don't have to miss a minute or worry that there's anything remotely funky going on.

Whether you heard that the halftime show was great or that it was completely disappointing, rewatching it means that you can figure it out for yourself.