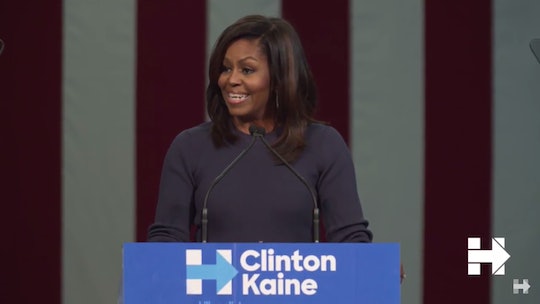 How To Rewatch Michelle Obama’s Speech in Manchester New Hampshire, Because It's Flawless

President Obama isn't the only amazing speaker in his family. First Lady Michelle Obama delivered a speech in Manchester, New Hampshire, on Thursday, and if the crowd wasn't psyched about voting for Hillary Clinton before, they are now. Luckily, if you missed it, you can rewatch Michelle Obama's full speech in Manchester on YouTube right now. The video is embedded below; Obama's speech begins at the 25-minute mark.

This wasn't your typical political speech, where someone wearing an American flag on their lapel blandly reads talking points off of a teleprompter. FLOTUS was fired up, more passionate than we've even seen her, and she devoted the first half of her speech – a little over half, actually – to Donald Trump and the recently leaked lewd remarks he's brushed off as "locker room talk." Obama appeared visibly shaken at times as she painted a clear picture of rape culture in America, and what it means to have a presidential candidate that embodies it.

She began by speaking about the International Day of the Girl celebration the White House had on Tuesday as part of its Let Girls Learn initiative, describing girls in attendance who'd sacrificed their own safety for an education. "I wanted them to understand that the measure of any society is how it treats its women and girls," she said, "and I told them that they deserve to be treated with dignity and respect, and I told them that they should disregard anyone who demeans or devalues them."

"That was Tuesday," Obama continued. "And now here I am out on the campaign trail in an election where we have consistently been hearing hurtful, hateful language about women." It was clear that she wasn't exaggerating when she said, "I can't believe that I'm saying that a candidate for president of the United States has bragged about sexually assaulting women." She actually had to pause in the middle, struggling to get the words out, as if some part of her brain was insisting that such a preposterous thing just couldn't be true.

The First Lady refused to let Trump's latest comments be minimized. "This was not just a lewd conversation. This wasn't just 'locker room banter.' This was a powerful individual speaking freely and openly about sexually predatory behavior." What followed should be required reading for every man, because this is what it feels like to be a woman in America today:

I listen to all of this and I feel it so personally, and I'm sure many of you do, too, particularly the women. The shameful comments about bodies, the disrespect of our ambitions and intellect, the belief that you can do anything you want to a woman? It is cruel, it's frightening, and the truth is, it hurts. It hurts. It's like that sick, sinking feeling you get when you're walking down the street, minding your own business, and some guy yells out vulgar words about your body. Or when you see that guy at work that stands just a little too close, stares a little too long, and makes you feel uncomfortable in your own skin. It's that feeling of terror and violation that too many women have felt when someone has grabbed them, or forced himself on them, and they've said no, but he didn't listen.

FLOTUS is sick of people not taking Trump's words seriously: "Too many are treating this as just another day's headline, as if our outrage is overblown or unwarranted, as if this is normal, just politics as usual. This is not normal. This is not politics as usual. This is disgraceful. It is intolerable. And it doesn't matter what party you belong to – Democrat, Republican, Independent – no woman deserves to be treated this way. None of us deserves this kind of abuse."

Are you pumped yet? Because I'm about ready to start kicking down doors and demanding action, but maybe that's just me. OK, just a couple more gems: "We simply cannot endure this or expose our children to this any longer. Not for a minute, let alone for four years." And: "To dismiss this as everyday locker room talk is an insult to decent men everywhere." Serious question: is it too late to dump Tim Kaine and get this Michelle Obama on the ballot as vice president? Because I for one am not ready to let her go.