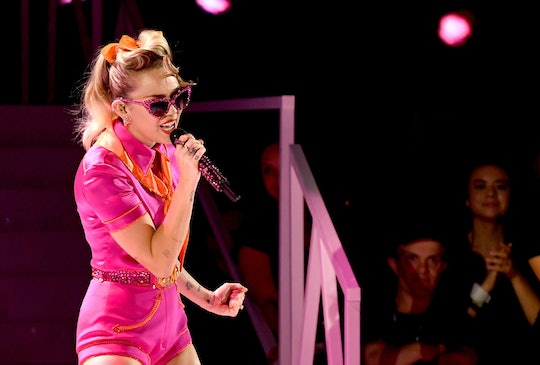 Miley Cyrus' VMAs Performance Slayed & You Need to Watch It

2017 has been a whirlwind of a year, filled with unspeakable acts of violence, a reality television star becoming president, and a lot more negativity than anyone thought was possible. But, 2017 also brought about new music from Miley Cyrus, and that's pretty great. So, now that Cyrus has absolutely slayed the world... how can you rewatch Miley Cyrus' VMAs performance, because it was so outstanding, you know you want to.

Taking the stage to sing her new hit single, "Younger Now," Cyrus performed one of her best vocal performances she has in a while, and it didn't go unnoticed. For now, her full performance hasn't been uploaded anywhere, but that could change at any moment.

At the moment, one of your best options might be to rewatch the VMAs later tonight, as MTV plans on airing the entire show again, right after the live version ends. There are also some pretty great clips on Twitter to help give you an idea of how great Cyrus' performance was.

Update: as of 9:58 p.m. EST, Cyrus' full performance has been uploaded to YouTube. You can watch it here.

Seriously, no matter how you feel about her music or style, there really is no denying that Miley Cyrus has some of the best vocals on the planet, and they deserve to be witnessed multiple times.

Cyrus hadn't performed at the VMAs since her infamous 2013 performance alongside Robin Thicke, for which she received a lot of harsh criticism. Earlier on Sunday, Cyrus took to Twitter to clear up any rumors that her performance this year would be just as provocative. "Sorry Dad.... I'll be good tonight I promise ..." she wrote, alongside a photo of her dad's face photoshopped above her twerking booty back in 2013.

And on Sunday night, she certainly did her family proud. As any fan of Cyrus knows, her family is extremely important to her. And Sunday, they were all in the audience, watching with pride as she kicked butt and wowed us all with her insane vocals.

A lot has changed for Cyrus over the past couple of years. She has gotten back to together with her fiancé, Liam Hemsworth, and released new music that shows a new Miley.

However, some things never change. Just like Cyrus is still the compassionate, hardworking woman she's always been, so are her vocals still on fire. Seriously, y'all, she killed it.