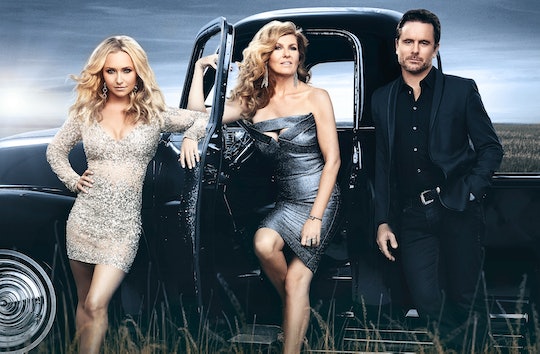 Rewatching 'Nashville' Season 5 Will Be Easy

It's time to return to Nashville! After ABC canceled the popular country drama, fans were relieved when CMT stepped in to pick up the series and continue with the show's fifth season. The channel aired a sneak peak of the new season in December, but now it's time for the show to really begin in full force. Starting on Jan. 5, fans will be reunited with their favorite fictional country stars, Rayna James and Juliette Barnes, along with the rest of the fabulous cast. However, if you can't watch the season premiere live here's how to rewatch Nashville Season 5, so you don't miss a thing.

Just like with most channels these days, CMT will be uploading the full episodes of Nashville to their site the day after the episode airs and you don't even need to log in to watch. Alternatively, if you have a Hulu subscription you can also find the new episodes online there as well. Lastly, if you want to rewatch the episodes over and over again until you get sick of them (just kidding, that could never happen), you can also get a season pass from iTunes or Amazon video, so you can get the episodes automatically downloaded on your devices when they become available. There are so many ways to rewatch, there's absolutely no reason for you to miss out on this new and exciting season.

Although the sneak peak of the first half of the season two-hour premiere has already expired on the CMT site, you can still watch it by purchasing it on iTunes or Amazon video. It should also still be available on Hulu as well. But even if you missed it the first time around, no worries. That first hour will be re-airing as part of the full premiere this Thursday evening. "The Wayfaring Stranger," which debuted back in December, will be the first episode to kick things off at 9 p.m. ET. and will be immediately followed by the second episode, titled "Back in Baby's Arms."

The Season 5 premiere is sure to answer a lot of questions for diehard fans, particularly regarding Juliette's journey after her plane horrible crash and how she continues to cope with the aftermath. Fans will also see more of Maddie's teen drama, Scarlet and Gunnar's relationship (both professional and personal), and what the future holds for Rayna's record company, Highway 65.