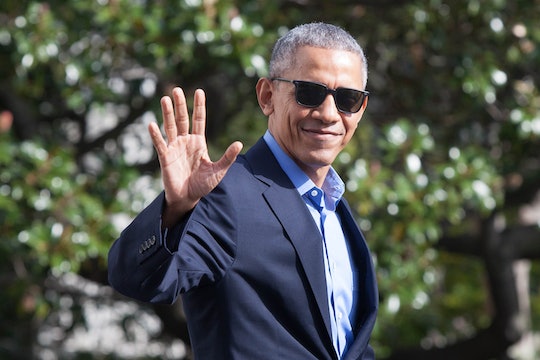 How To Rewatch Obama's Farewell Address

On Tuesday, Jan. 10, Obama will make his farewell address in his hometown of Chicago, Illinois. The address will air at 9:00 p.m. Eastern Time.

You'll be able to watch the address live from the White House's website and from its Facebook page, which I'm sure will still be available once it's over. Its YouTube page will likely have the farewell address posted as well.

The address will air on all of the major networks, and will surely be available on their websites and YouTube pages to rewatch. Cable news networks such as Fox News and C-SPAN will air the address as well, and you'll definitely be able to rewatch it on their website — they even still have video of President Bush's farewell address. Here's a YouTube video of the event, filmed by NBC News, if you're looking for a shortcut:

The presidential farewell address has a long history, and offers a chance for each president to reflect on what he accomplished while in the highest office.

I'm looking forward to Obama's speech. For years, the president has been praised for his eloquence; for his ability to speak and completely pull people in. Listening to President Obama speak is like eating a bowl of mac and cheese or chocolate chip ice cream: it's comforting.

Many want to see Obama's remarks because it's been hinted that he will advise our next president Donald Trump to celebrate America's diversity and the country's democracy. An unnamed Obama loyalist told CNN that Obama will admonish "about the challenges we face moving forward."

I'm just beginning to write my remarks. But I'm thinking about them as a chance to say thank you for this amazing journey, to celebrate the ways you've changed this country for the better these past eight years, and to offer some thoughts on where we all go from here.

“I think his message of hope, his initial campaign message, resonated with me...,” Laura Cabral told the Chicago Tribune. “As a person of color, as a Democrat, I really need this to lift my spirits.”

Adjusting to Trump is going to be rough for many of us. So let us celebrate, for one last time, that Obama is our president.