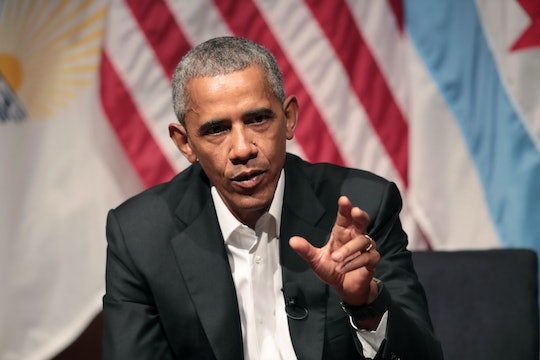 How To Rewatch President Obama's Speech

Since leaving office in January, former President Barack Obama has taken a much-needed vacation around the world. His three months of travel have seen him and former first lady Michelle Obama in the Caribbean, Tahiti, New York, and California. But on Monday, the former U.S. leader flew to his hometown of Chicago to deliver his first post-presidency address. Missed the event? Here's how you can rewatch President Obama's speech at the University of Chicago.

Obama's address on Monday marks his return to the public eye since giving his presidential farewell speech in Chicago in January. According to Bloomberg, his remarks at the University of Chicago have been billed as part of Obama's post-presidency aim to "encourage and support the next generation of leaders" around the country and the globe. During his speech, Obama told Chicago-area college students at the invitation-only event about his experiences with community organizing in Chicago and gave them advice on civic leadership and conquering failures, according to The Fresno Bee. But, in true Obama fashion, he first jokingly asked the crowd at the start of the event, "So, uh, what's been going on while I've been gone?," The Hill reported. If you haven't listened to the speech yet, you can watch it on Livestream, as well as on YouTube via TIME's channel.

During the hour-long speech, Obama engaged young leaders and community organizers at the University of Chicago on a number of vital topics affecting their generation. The former president spoke about the influence of social media, how to navigate the news, and the importance of youth empowerment. He also told the audience that "young people are critical to resolving the nation's most daunting problems," The Fresno Bee reported.

Like many of Obama's speeches, his address at the University of Chicago was one of frank and honest discussion. And the University of Chicago is a fitting place for him to make his first public appearance; the private research institution will host Obama's presidential library, the Barack Obama Presidential Center, which is slated to open in 2020 in Chicago's Jackson Park, according to NPR.

On Sunday, ahead of the speech, Obama met with at-risk youth in Chicago's South Side for a discussion sponsored by the Cred program, according to The Hill. He spoke with a group of young men and boys about their personal stories and their futures as community leaders, while sharing "some of the challenges that he faced growing up," a statement on the event read. Obama's former Secretary of Education Arne Duncan founded the Cred program and invited the former POTUS to the event, The Hill reported.

When Obama left office, he promised that he would be fully engaged in community activism as a private citizen, even launching the Obama Foundation. His return to the public eye on Monday, as well as the overall comments on community organizing, prove he is planning to keep that promise.