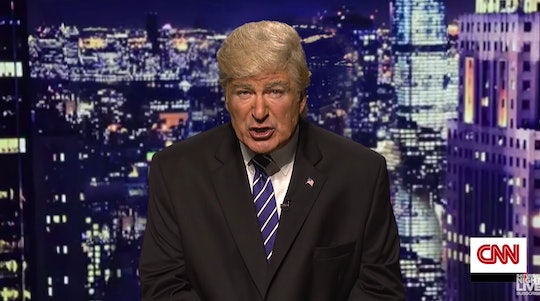 After The Washington Post leaked a video of Donald Trump making lewd comments about women on Friday night, chaos ensued. While Trump's comments made during the video were deemed misogynistic and insulting, Saturday Night Live was able to find the few bits of humor in the video and Trump's comments — or rather the outright disbelief that it had actually happened — and exploit them for ridiculing purposes. In fact, the sketch should probably be considered mandatory viewing for all voters — given how close to Election Day we are and because its something that people will be talking about for weeks to come — and figuring out how to rewatch SNL's Trump tape cold open actually isn't difficult at all.

More Like This
20 Candid Photos Of Queen Elizabeth With U.S. Presidents Over The Years
14 Great TV Episodes To Watch With Dad On Father’s Day
20 Great Movies About Fathers & Sons That Will Make You Laugh & Cry
25 Great Kids’ Shows To Stream On Paramount+

The skit, which aired during the most recent episode of SNL, covers a lot of political ground from the past week. It starts with an encore presentation of Tuesday night's vice presidential debate — featuring cast members doing hilarious impressions of Democratic Party vice presidential nominee Tim Kaine and Republican Party vice presidential nominee Mike Pence. Or, as SNL calls them, "America's dad" and "America's step-dad," respectively. However, the debate is cut short by the breaking news of Trump's hot microphone video being released. And the person to defend Trump on CNN this time is not a representative of his campaign, but Trump himself — who does not apologize for his actions but "apple-agizes."

The skit comes on the heels of a very important weekend for Trump. On Friday night, Trump released a rare statement apology in regards to his comments in the hot mic video and then released a video apology later in the evening. On Saturday, numerous GOP politicians condemned Trump's actions.

On Sunday evening, Trump and Democratic Party nominee Hillary Clinton will debate for the second time. This weekend has definitely been a "make or break" weekend for Trump in this election — and the leaked video, does not portray him in the best light at this point in time.

Amid all of the seriousness surrounding this election, thanks to Saturday Night Live, we can at least laugh about the current political situation (or maybe laugh through the tears) — even if it is for just one night.