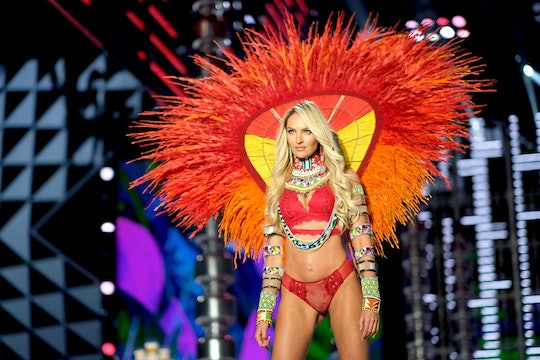 You Don't Want To Miss The 2017 Victoria's Secret Fashion Show

The 2017 Victoria's Secret Fashion Show took place last week on Nov. 20 in Shanghai, China, but you can still watch the show in full on CBS this Tuesday night. However, the show doesn't begin until 10 p.m. EST and if you're like me, that may be too late for you. So here's how to rewatch the 2017 Victoria's Secret Fashion Show, in case you miss out on all the excitement.

Unfortunately, it doesn't seem like there's a lot of ways to rewatch the show in full. Because the event is airing on CBS, you'll probably be able to watch the show on CBS All Access the following day, after the show airs. If you don't already have a CBS All Access account, you can sign up for a free trial to watch, but if you forget to cancel it once you're done, it'll cost you $9.99.

Other than that, there doesn't appear to be any other rewatch options, however, you'll most likely find clips from the show on YouTube and social media after the show airs. You can already find photos of the models walking the runway online. Outside of that, the best way to rewatch is probably just to DVR the special if you have a TV. If you don't have a TV, hopefully you know someone who does because this year's show looks amazing.

After walking in the show 17 times, Ambrosio has decided to take off her wings and enter retirement. It's uncertain if she'll keep modeling and is just leaving VS or if she's done for good. Either way, the model noted that the night was especially emotional, in an Instagram post she shared after the show.

"Last night was so emotional to say goodbye to my #angel sisters but we put on the biggest and best show ever," she wrote. "I could not have done this without all the love and support from my fans. It gives me great pride to be part [of] the Victoria's Secret movement! I will always be cheering for you! Love you forever."

Missing in action this year was Behati Prinsloo, who's married to Maroon 5 singer and The Voice coach Adam Levine. She is currently pregnant with the couple's second child, but shared her love and support for "the girls" on Instagram the day before the show took place. Filling the empty spot was Karlie Kloss, who returned to the runaway after taking a two year hiatus. Although Kloss' return is certainly monumental, don't expect to see her bestie Taylor Swift in the audience. She's been a bit busy with the release of her new album. Kloss did share a cute high-five with her other musically inclined friend, Styles, onstage during the show.

Some newer faces you'll see on the runway this year include Taylor Hill, Jasmine Tookes, Grace Bol, Gizele Oliviera, Vanessa Moody, and Lais Ribeiro who donned a $2 million Fantasy Bra for the show. The ladies were, of course, wearing the newest fashions of Victoria's Secret, which included the VS x Balmain collection. For the show, the fashion company also enlisted designer Brian Atwood to design sandals to go with the models' costumes.

You can see all the costumes and performances tonight when the 2017 Victoria's Secret Fashion Show airs on CBS at 10 p.m. EST.