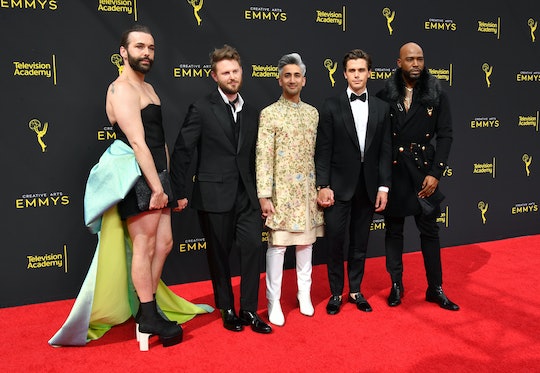 How To Rewatch Everything You Missed At The 2019 Emmys

The 71st Primetime Emmy Awards are here and all eyes are on Game of Thrones to see how the HBO drama will fare in its final eligible season. It's also been a great year for limited series (Chernobyl, Fosse/Verdon, When They See Us), and viewers are anxious to see how The Marvelous Mrs. Maisel, which swept the comedy categories last year, does in its second season. But if you can't tune in live, you may be wondering how to rewatch the 2019 Emmys and catch up on everything you missed.

The Emmys will air live on Fox with additional livestreams provided on Fox.com and on the FOX NOW app, as long as you have a cable subscription. Various streaming services with live TV packages are also expected to air the Emmys, including YouTube TV, Hulu with Live TV, DirecTV Now, and PlayStation Vue, according to E! News. In years past, network broadcasters have made their Emmys telecast available online and on their apps after the fact for rewatch, according to CNET. But if Fox.com and FOX NOW don't make the broadcast available in full after it airs, there are some (slightly more tedious) ways to catch up on what you missed.

The Television Academy social media accounts typically post clips of each category in the main telecast shortly after they air, so you can watch every winner accept their award, albeit, in a series of clips. You won't catch every interstitial moment, but clips of the opening monologue, pre-recorded skits, and other buzzy bits will likely be posted as part of the show's highlights. Check the Television Academy Facebook page, Twitter account, and YouTube after the show; between those three, you should be able to piece together most of the broadcast.

Like this year's Oscars and MTV Video Music Awards, the 71st Primetime Emmys will go sans host this year, according to People, to test out how the popular new trend will work for them. Needless to say, it was wildly successful for the Oscars and audiences seemed to enjoy the flow — and the variety in bits — much better. Hollywood seems relieved, too, since no one has to take on the unenviable, largely thankless, and often harshly criticized task of hosting. Doing away with a host seems to be an all-around more pleasant and far less awkward alternative. Plus, since three major award show darlings — Game of Thrones, Veep, and The Big Bang Theory — are nominated for their final seasons this year, Fox CEO Charlie Collier pointed out that the broadcast wanted more time to pay tribute to the departing series.

“The conclusion was reached that this year, because we were highlighting so many shows going away, that it would be useful to save the time [by doing away with a host]," he said during the Television Critics Association press tour, according to Time. "You have to look at the trade off. If you have a host and an opening number, that’s 15-20 minutes that you don’t have to salute the shows."

It makes sense and, my guess is, fans will probably appreciate the extra time dedicated to sending their favorite shows off with a bang.

More Like This
The Best TV Shows For 5-Year-Olds
The 20 Most Romantic Quotes From Friends
When Does 'Yellowstone' Season 5 Come To Peacock? Not Soon Enough
10 Parenting Lessons We Learned From Red & Kitty In 'That '70s Show'
What Parents Are Talking About — Delivered Straight To Your Inbox