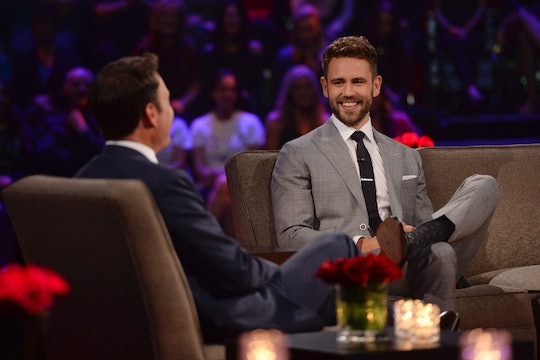 How To Rewatch 'The Bachelor' Season 21 Finale

After a tumultuous few months, Season 21 of The Bachelor is finally coming to an end. There have been plenty of ups and downs, thanks to Nick Viall's ~ahem~ non-traditional approach to being the Bachelor and his pretty obvious disregard for things like rose ceremony etiquette in favor of cliffhangers (SO MANY CLIFFHANGERS). It's been a season of tears, twists, naps, and nannies, and it'll all be over soon enough. Despite that, there are Bach Nation devotees among us who are already wondering how to rewatch The Bachelor Season 21 finale, because there's no doubt in my mind you'll want to relive all that drama ASAP.

Luckily, there are plenty of options allowing a brief reprieve for those viewers who aren't quite ready to say goodbye to Nick, Raven Gates, and Vanessa Grimaldi. The simplest options are ABC.com or Hulu. For those who have a subscription to the streaming service, episodes of The Bachelor are typically available by the morning after the live airing, if not within several hours of it. Same deal with ABC, who has a page for the yet-to-be-aired finale up already and waiting to go. In fact, Hulu also has the last five episodes of the season, so you can go back even farther if you're inclined to relive Corinne Olympios' priceless antics and immediately iconic catchphrases.

But for those who don't already have a Hulu subscription and aren't interested in committing to one just to rewatch Nick Viall's Bachelor finale (and also don't want to deal with ABC's streaming player), there are other options available. The iTunes store (for Apple devices) releases individual episodes of the show for sale, each at a price-point of $2.99, the day following the live airing. If you're really feeling like going on a Bachelor bender, iTunes sells full seasons of the show stretching back years. Amazon Prime also offers episodes of the show (or the entire season) for the same price, as does the Google Play store for Android devices.

One thing is for sure: the season finale of The Bachelor is sure to be a memorable event. Mike Fleiss, the Bachelor Nation head honcho, has already tweeted about the supposedly "historic" nature of the finale and the After the Final Rose special.

What could this possibly mean? Is Fleiss being facetious? Will Nick decide he can't choose between Raven and Vanessa and just sit down in the snowy Finland landscape and weep? Will he choose both of them, giving Bachelor nation its first polygamist outcome? Will he choose one and then be the first Bachelor to have a finale proposal rejected? So many questions. We'll just have to tune in Monday night for the three-hour (!!) finale event to see how it all goes down.