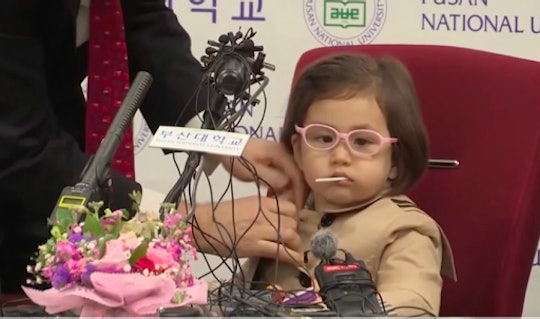 The BBC Toddler's Press Conference Is A Must-Watch

World hero Marion Kelly, otherwise known as the "BBC Toddler," gave a press conference to reporters Wednesday with her dad Robert, a political science professor at Pusan National University. Wearing glasses, a cardigan, and sucking on a lollipop, Marion didn't look nearly as excited to be there as everyone else was about hearing what she had to say about her new internet fame and what she was really thinking when she crashed her dad's live interview. But that doesn't mean the event was any less wonderful and if you missed it (don't worry if you did, it aired pretty early in the morning here in the United States), there are plenty of ways to rewatch the BBC toddler's press conference from Wednesday, if only because you need a good laugh.

OK, so Marion didn't actually give the press conference, but she was there with her mom, Jung-A Kim and her 9-month-old brother James while her dad did. You can rewatch the press conference they did at Pusan National University in South Korea Wednesday morning via The Independent, and another one they did with BBC (using the same statement) via The Guardian here. They also gave a press conference to The Wall Street Journal for an American audience, covering all their bases.

The interviews and clips from them are all over Twitter and YouTube as well. We'd love to let them just live their lives, but Marion and James are way too funny to give up. You can watch the BBC version right here:

Marion, how can we put this nicely, doesn't exactly sit still throughout any of the press conferences (though she does wear different colored glasses for each one and we're a little envious of her ocular accessories), so it seems like that "hippity hoppity" mood from last week is more of character trait than anything else. Because what else are 4 year olds supposed to do?

What the interviews really show is quite possibly the most normal family in the entire world. They said in a statement released Wednesday that they were taken aback by all the media attention, which is why they haven't really been giving many interviews. They said that if we're all still interested, they'll take some in a week or two when they have more time. Preach!

Actually, Kelly was more concerned about his job than his Twitter fame. "We assumed that no television network would ever call me again to speak," he said in the press conference for local Korean media.

In an interview with James Menendez, the original interviewer for BBC, he added, "That was our first response — mortification that we had completely blown our relationship with you.”

His wife added, "We laughed a lot, but still we were worried a little bit more.” Imagine assuming your professional career was kaput and then becoming a viral sensation. Not bad.

The family clarified that no child was harmed in the making of the viral video and that Kelly was not shoving his daughter, but trying to push her to the back corner where they keep books and toys and hoping (praying) that she would be distracted for 30 seconds so they could cut the interview off.

"But once my son came in on the little roller, then it was sort of... there was nothing I could do," he told the BBC on Wednesday. And as for why he didn't stand up and move the kids? "I was wearing pants," Kelly begrudgingly admitted. He was just trying to keep the interview professional until Marion and James got quiet or his wife would come his rescue (which she did, thank you very much).

We understand all this attention can be taxing, but we have to admit, we want more Marion. Surely there's a Keeping Up With The Kellys we could work up?

More Like This
Festive Mommy & Me Holiday Nail Ideas To Try
Spread Some Christmas Cheer In Your Child’s Bedroom
20 Stocking Stuffers For Kids Under $20
101 Advent Calendar Activities, From Books To Read To Cookies To Bake