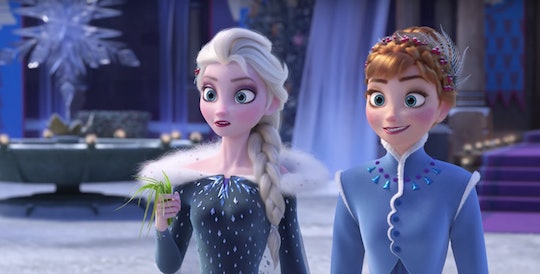 Of all the things that 2017 has thrown at us so far, who knew that a 21-minute long Disney short film would be the one to break people's spirit? If you were smart about planning your family's trip to the theater over the holiday weekend, you might be wondering how to rewatch the Frozen short that movie theaters are showing before screenings of Pixar's Coco. Or not. Really, according to most people on Twitter, it might have been traumatizing enough to just see it the once.

Pixar's latest movie Coco won the Thanksgiving weekend box office, according to Variety. But Disney, which owns Pixar, threw in an extra treat for movie-goers before the opening credits of its newest film: a 21-minute long short film called Olaf's Frozen Adventure. However, most grown-ups with tweeting thumbs all seem to really not be loving it. According to Vox, some theaters in Mexico have even stopped playing the short film before the main event just because so many people complained about the length of the opening act.

Right now, the only way to watch the Frozen short is to go to the movies and catch it for yourself, though Disney will likely release it in some form later on. Which might be a good thing, according to parents everywhere.

Really, People Are Not Thrilled

It Was Also Just Really Confusing

I Mean, A Hate Crime? Honestly, That's A Bit Much

To be quite honest, the strong reactions secretly make me want to go see just how bad this thing is for myself. Luckily, I don't have small children and will likely be able to make it through the rest of my adult life never having to sit down and endure this highly criticized piece of media. But I can't say that the tweets haven't piqued my interest.

The short is about the inhabitants of the Frozen universe having to deal with no holiday traditions because of Elsa's curse. It's meant to be a follow-up to the Frozen Fever short, which aired before Cinderella in 2015. That one ended up on YouTube eventually, so it's likely Olaf's Frozen Adventure will, too, if you can't wait to see what everyone is complaining about.

You can already watch the trailer if you want to get a taste for it there.

Mostly people are mad that it's not really a "short" because it's actually 21 minutes — and that's a long time! Especially when you think about settling into a full-length feature film about something else entirely, for you as well as the little ones with you.

Considering that parents precisely time their outings in the name of avoiding total meltdowns in the theater or the car ride home, this seems like a bit of an oversight. Adding an extra 21-minutes is something someone should have informed viewers about, if only to plan appropriate snacks and bathroom break time.

According to Mashable, Pixar didn't tack the short on before showing Coco to critics. Apparently, Olaf’s Frozen Adventure was reportedly supposed to be a TV holiday special set to air on ABC, since the network is owned by Disney, and a "bridge" to Frozen 2, according to IndieWire. But someone high up must have thought that it would help Coco at the box office or there just wasn't enough time for it in the schedule. Representatives from Walt Disney Studios did not immediately return Romper's request for comment.

But, you may not get to rewatch the Frozen short in theaters after all, now that some international chains have already started pulling it because of complaints, according to Forbes. If you don't want to wait until Olaf's Frozen Adventure is released (likely on YouTube or another streaming service at a later date), it might be worth calling ahead to ask if they're still showing it. Otherwise, for the time being, you might just have to sit tight and wait for it be released elsewhere — when you can be sure to schedule those 21 minutes wisely.