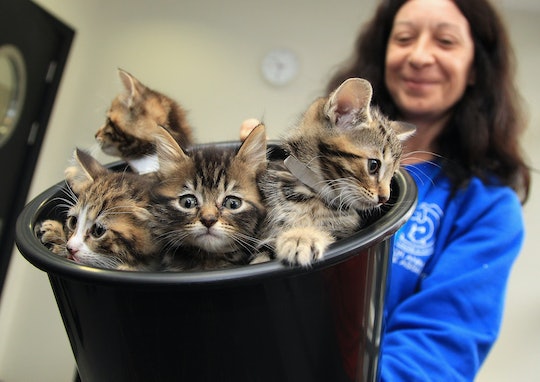 We all know the best thing about the Super Bowl every year isn't the actual football game. It's not even the delicious party food or the heartwarming commercials. The best part of Super Bowl weekend is, obviously, the Kitten Bowl. The unbelievably cute event kicked off on the Hallmark Channel at 12 p.m. Eastern Time on Sunday with a pre-game show and ended at 3 p.m. Eastern Time after a championship game. If you missed the event, don't worry: There are ways to rewatch the Kitten Bowl online, if you miss the re-runs on TV.

The Kitten Bowl airs on the Hallmark Channel annually, and fans of fluffy, adorable kittens playing with each other — which is pretty much everybody — tune in to get their cuteness-fix for the week (or month). The championship game will air on the Hallmark Channel three times in row, according to Gothamist, so if you missed it the first time you can still tune in to the replay. But what if you missed it? Don't sweat it.

The event was also broadcast live from the Hallmark website, where you can also rewatch later. Cat lovers will be able to tune in from their phones and computers if they didn't have access to a television during the game or weren't able to catch the initial livestream. This is good news for everybody, let's be real. (You do have to log in with your cable provider information to access the stream, which may prevent some people from tuning in to the event on their computers, but the event will likely be posted to Hallmark's YouTube channel afterward as well, so you can likely catch it there.)

If you don't have a cable provider, you can still catch all of the highlights from the Kitten Bowl. There are tons of videos posted on Hallmark Channel's website, as well, so you can rewatch the most memorable moments. They have plenty of short videos to choose from, from the coin toss to hilarious bloopers, that it might feel like you didn't even miss the Kitten Bowl at all.

The Kitten Bowl aims to raise awareness about pet adoption from local animal shelters. All of the cats competing in the event are adoptable and the Kitten Bowl had hoped to see them all adopted thanks to their exposure — and as it turns out, they were successful. The event coordinators reached their goal for 2017, with every kitten participating in the event having been adopted and moving on to loving homes. (The Hallmark Channel teamed up with North Shore Animal League for the event, as well as the North Shore Animal League; both locations, as well as 100 other shelters, broadcast the Kitten Bowl to help raise awareness, and some will also be offering adoption specials to coincide with the big weekend.)