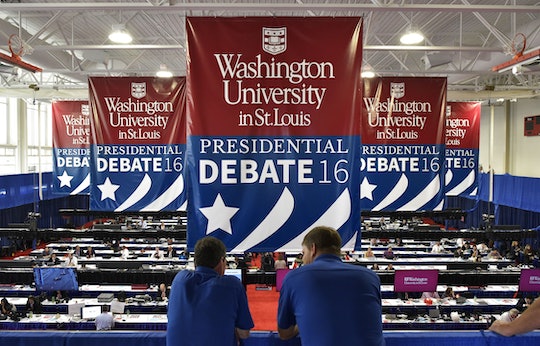 How To Rewatch The Second Presidential Debate

When the dust settles after the town hall-style showdown between Hillary Clinton and Donald Trump, recaps and highlights will dominate the news for the next few days. But, for those who want to skip the clips and see the full meeting, you'llwant to know how to rewatch the second presidential debate.

There are plenty of ways to watch the second debate between Clinton and Trump, including on all of the major television networks, Roku, Apple TV and more. However, for anyone who missed the show, the options are a bit more limited: The easiest way may be to go back to the beginning of NBC's presidential debate live-stream on YouTube.

The live debate is scheduled to last 90 minutes, but the fireworks are expected to begin early. According to CNN Money, moderators Anderson Cooper and Martha Raddatz adjusted their plans to lead with questions about Donald Trump's 2005 comments about women. Trump's lewd statements came to light just days before the debate and promptly shook up the election, with notable Republicans disavowing Trump and calling for him to drop out of the election. After the firestorm, Meet the Press host Chuck Todd said he wouldn't be surprised if Trump didn't even show up for the debate. When he did, it made for one of the most memorable presidential debates in recent history.

It was predetermined by the Commission on Presidential Debates that Clinton would be asked to speak first, followed by a direct question to Trump about the unearthed tape. The format of this debate also allowed for the timely questions that real voters want answered: As a town hall meeting, the 40 participants selected by Gallup were able to submit their own questions to the moderators as late as Sunday morning.

For those who missed out on the early moments of the debate, it is already available to rewatch on YouTube. The YouTube comments section also provided an interesting forum for people to weigh in on what they thought of the debate: By the end, more than 8,000 viewers gave the debate an unfavorable "down" vote. Interestingly, the majority of the top comments—based on likes—declared Trump the winner. Other early internet surveys, including those from People and NJ.com, gave the edge on the second debate to Trump.

It will be a few days before the formal poll results come out. And, with less than one month until election day, what viewers think of the debates is more meaningful than ever. So, be informed and watch.