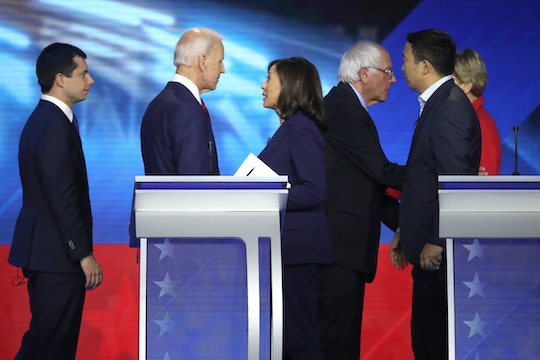 Couldn't Watch The Democratic Debate Live? Here's How To Rewatch

Now that the 2020 presidential debates are well under way, there's a lot of information out there for voters to consider. The candidates have voiced their thoughts on a huge number of issues on the campaign trail and on the debate stage. And if you missed the most recent debate on Thursday night, don't worry — how to rewatch the third democratic debate is very easy.

On Thursday, Sept. 12, 10 of the 2020 Democratic presidential hopefuls came together to discuss a number of issues. Over the course of two hours, the candidates voiced their concerns about topical problems facing voters and tried to get their vision for the future of the nation across to voters. Although there are now fewer than five months away until the first votes are cast in the first of the primary elections, according to NPR, this debate was not only critical in helping people see where the candidates stand on the issues that matter most, but it allowed them to see if anything has changed since the last debates in August.

While Twitter has been filled with plenty of notable moments from the debate, some people may be looking to watch the debate in full, without bits and pieces from it taken out of context. And since the debate was streamed live on YouTube, you can head to that live stream to rewatch the whole entire thing. If you're not interested in commentary beforehand, fast forward to the 2:59:52 mark on the video.

For those looking for the highlights of the night, ABC News also has a shorter, condensed version of the debate uploaded to YouTube, which includes Beto O’Rourke’s crowd pleasing comments about banning assault weapons. On Thursday night, Beto O’Rourke stated that he wants AR-15 and AK-47 guns “left on the battlefield.” Another noteworthy moment of the came from Andrew Yang when proclaimed that his campaign is going to give 10 families $1,000 a month for a year, if they can present him with a plan to solve any problem better than a politician. And if seeing all of the candidates speak at once is more your speed, then you can see how all of the candidates respond when asked about improving the education system in the United States.

While Twitter is be filled with some of the funnier and most viral moments from the debate, it’s important for voters and concerned citizens to really watch and listen to what the 2020 presidential hopefuls have to say. There is a little more than a year until the elected Democratic candidate accepts the party’s bid for the Democratic presidential nominee at the Democratic National Convention in Milwaukee, Wisconsin. And there are a little more than 400 days until the 2020 Presidential Election in November next year. With this in mind, watching the debates and learning more about the candidates is absolutely necessary. There is only so much time left to see where each candidate stands before the podiums on stage begin to dwindle.