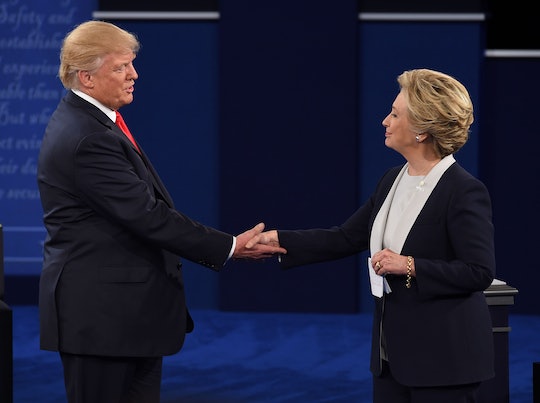 How To Rewatch The Third Presidential Debate, Because It's The Last One Before The Big Day

The third and final presidential debate will take place on Wednesday, Oct. 19 at 9 p.m Eastern Time at the University of Nevada, Las Vegas. As this election season becomes more scandalous, the importance of the third debate becomes greater because it will give the candidates a final chance to talk about important issues that have gotten lost this past week. For those of you who can't watch on Wednesday, or who want to watch it for a second time, here's how to rewatch the third presidential debate.

The third debate will not only be streamed online by NBC News, The Washington Post, and Fox News, but it will also be available on all of those news sources' websites. Several sources, including ABC News, Fox News, PBS NewsHour, and C-SPAN have uploaded videos of the previous debates to YouTube, and will do so for the final debate.

One benefit of watching the debates after they've aired is that you can watch the highlights of the 90-minute affair. Fox News, ABC News, and USA Today were among many media sources to upload highlights from the second presidential debate — and it's likely they will do so for the third debate as well.

Bloomberg Television, which has streamed 30 minutes of political commentary before and after each debate on Twitter, will also make these videos available on YouTube and on its website.

C-SPAN has uploaded many videos of the previous debates to its website, including ones that are segmented by question. This is great for those of you who are most interested in watching the candidates discuss a particular hot-button issue.

The format of the third debate will be identical to the first: in 90 minutes the moderator will ask a questions about six topics, and each candidate will be given two minutes to respond to each question.

The third presidential debate will be moderated by Chris Wallace, host of Fox News Sunday. The topics that will be covered during the third debate were chosen by Wallace, and include debt, immigration, the economy, foreign hot spots, the Supreme Court, and each candidate's fitness to be President.

Republican presidential candidate Donald Trump brought attention to the third debate last week at a campaign rally when he oddly asked for Democratic candidate Hillary Clinton to take a drug test before the debate. "We should take a drug test prior to the debate because I don't know what's going on with her," Trump said, according to NBC News. "But at the beginning of her last debate, she was all pumped up at the beginning. And at the end … she could barely reach her car."

Much of the attention of this campaign has been dedicated to reports that Trump allegedly sexually assaulted several women, which he has denied. Trump's campaign has not responded to Romper's requests for comment. "As you have seen, I am a victim of one of the great political smear campaigns in the history of our country," Trump said last Friday at a rally in Charlotte, North Carolina, according to CNN.

"My people always say, 'Don't talk about it, talk about jobs, talk about the economy,'" Trump said at a different rally in North Carolina, according to CNN. "But I feel I have to talk about it because you have to dispute when somebody says something."

It is unclear whether these allegations will be addressed at the debate. But no matter what, the third debate is sure to cap off what has been a tumultuous election season — so don't miss it.