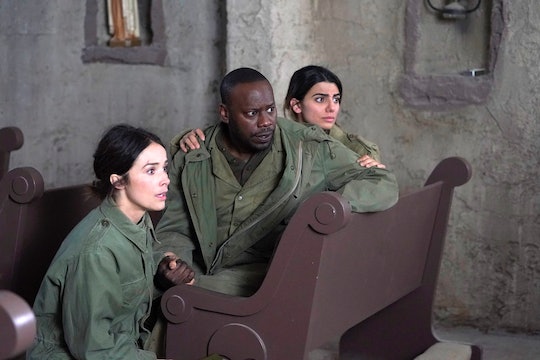 The moment Timeless fans have been waiting for is finally here. The series’ finale premieres on Thursday, Dec. 20 on NBC, and with all its exciting twists and turns, viewers will probably want to watch it again after it airs. So, if you’re hoping to take one more ride on the lifeboat with Lucy, Wyatt, and Rufus, you should know how to rewatch the Timeless movie finale.

The Timeless movie finale will first air on NBC at 8 p.m. ET on Dec. 20, but you should be able to rewatch the special through NBC.com or the NBC mobile app the next day. The finale can be live-streamed through Hulu Live with a subscription, and it will be available to stream on Hulu the day after it airs. If you are a digital cable subscriber, you might be able to watch the Timeless finale through your cable receiver’s “on demand” feature for NBC. If you haven’t seen Timeless yet, or just want to rewatch the series from the beginning, you can find the first two seasons on NBC.com, the NBC mobile app, and on Hulu.

So, what can you expect from the Timeless movie? It’s a two-hour finale that will pick up right where the Season 2 cliffhanger left off. When fans last saw Lucy, Wyatt, and Rufus, they were coming back from a mission that left Rufus dead. When it looked there was no hope to save him, future Lucy and Wyatt come to the bunker and leave the team with a new-and-improved lifeboat they could use to get Rufus back. The finale will bring Rufus back into the fold, and give fans some closure on Rittenhouse, Lucy and Wyatt’s relationship, and Flynn’s involvement in their storylines.

In an interview with SYFY, Timeless executive producer, Shawn Ryan revealed that the finale will also dive into the mystery of Lucy’s journal, which first showed up in Season 1. He said that Timeless creator Eric Kripke wanted to make sure the journal’s background was revealed in the finale, so that it could give fans closure on that front as well. “The other thing Eric wanted to make sure we addressed in this finale was Lucy's journal that has played a big part of the show from the pilot episode,” said Ryan. “We always hinted about where it came from, how it was used and how it came to be. Eric wanted the audience to have clarity about the journal. The journal plays a real big role in this movie.”

But while the finale will bring the show’s storylines to a close, it will also leave wiggle room for future Timeless projects. When talking to Collider, Kripke revealed that he’s open to making more Timeless stories if the opportunity comes along. “There’s a certain amount of shocking turns, and we tried to let it build to something and provide a certain amount of closure, and give you a sense of where these characters go,” said Kripke. “We tried to put a period at the end of the sentence, but not so much that the door isn’t open for further adventures, down the road.”

Kripke added that he’s really proud of the series and its positive message, so he would be thrilled to see it find a future somewhere. “These are some scary times, and I think that show is a force of positivity, and inclusion and diversity, in a world that, frankly, desperately needs it,” said Kripke. "I’m really proud of the message of that show. I’m proud of its heart, and everyone else who works on it feels the same. I think we’d be happy to find a way to continue that story.”

Timeless’ future is still unknown, but if the finale gets high enough ratings and social media buzz, there’s a small chance it gets picked up again. After all, it is a series that survived two cancellations, and loyal fans continue to fight for its survival. But for now, viewers will get to enjoy one more ride on the lifeboat, so they can go back in time and finally save Rufus.

The Timeless movie finale premieres on Thursday, Dec. 20 at 8 p.m. ET on NBC.