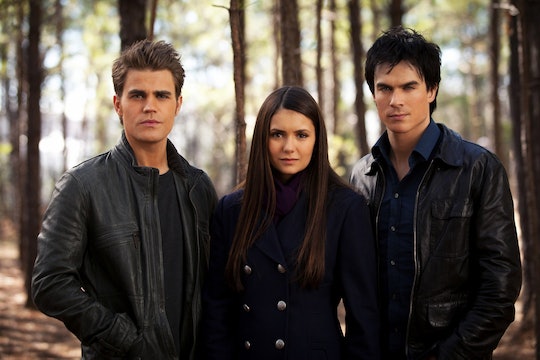 If you're wondering why Friday isn't providing you with the usual joy you've come to associate with the end of a typical work week, that's because you're feeling the soul-crushing emptiness The Vampire Diaries has left behind. Our Mystic Falls journey has come to a close, which is a pretty hard reality to face if you were a diehard fan. (And let's face it, we were all diehard fans.) Luckily, though, there's a way to help fill that vampire void — you could relive the drama all over again. Not sure how to rewatch The Vampire Diaries series? No problem! That's what I'm here for.

If it's only the last few episodes you feel like catching up on, then CWTV.com has posted the last five TVD episodes of the series on the site, so you could head over there right now and start the healing process from there. However, if you truly want to take a deep dive back in time and watch the entire series from the very beginning, then you need do nothing more than head over to your nearest Netflix account because all eight seasons are available for your streaming pleasure starting Saturday, March 18. That's right, this is not a drill, my friends.

Granted, you could still get started right away since Seasons 1-7 are ready and waiting for you at this very moment. But it takes a little time in order for Season 8 to make its grand debut — however, not as much time as it used to. Due to the latest deal The CW made with Netflix, the latest season of any series from the network is made available on the streaming service eight days after the finale airs. And since the TVD series finale aired on March 10, that means March 18 is now our new favorite day.

So with the entire collection of episodes at your disposal, you can go back and relive everything that made you fall in love with the show in the first place. Watch Caroline really come into her own as a vampire. See that first initial spark between Elena and Damon. Not to mention, the finale had so many callbacks to the pilot episode. So now that the finale is still fresh in your mind, head back to the beginning and catch any hidden references you may have missed. After all, just because the show is over, doesn't mean your obsession has to be.