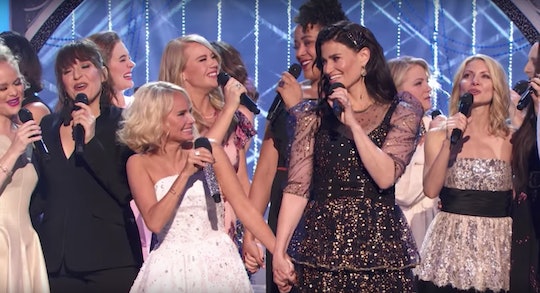 If You Missed The 'Wicked' TV Special, Don't Worry: Here's How To Watch It

Fifteen years have already come and gone since the iconic musical Wicked first debuted on Broadway. But on Oct. 29, the original cast members Kristin Chenoweth and Idina Menzel acted as host and performers for A Very Wicked Halloween: Celebrating 15 Years on Broadway. You might have seen clips floating around on social media, but don't freak out if you missed it: here's how you can rewatch the Wicked TV special.

In 1995, Gregory Maguires acclaimed novel Wicked: The Life and Times of the Wicked Witch of the West re-imagined the Land of Oz, giving audiences a side of the story they had previously missed. Based on Maguires' novel, Wicked tells the story of an unlikely but profound friendship between two young women: the very popular Glinda and the misunderstood green girl, Elphaba.

Since its debut, Wicked has won multiple Tony Awards, including Best Scenic Design and Best Costume design in 2004. All the cast members involved have been wonderful, but no one can deny there's something magical about seeing original cast members take up their old roles once more.

If you don't have Halloween plans, this might be one great way to spend your Wednesday night — and heck, even if you do.

Lucky for fans, it's not too hard to locate the special in its entirety. The hour-long special originally premiered on NBC, as reported by IBT Times, which means fans can still find it there. According to NBC's website, the special can be watched both online and on the NBC app.

And good news: You don't need an account to stream the episode on NBC, so no worries there!

A Very Wicked Halloween can also be streamed in full on Hulu. However, you do need a Hulu account or login to access the episode.

On top of Chenoweth and Menzel being joined by the current Broadway company of Wicked, the special featured additional guest performers like Ariana Grande, Adam Lambert, Ledisi, and Pentatonix, as reported by Broadway World. The show also featured a surprise performance of generations of Elphabas and Glindas all singing "For Good".

Since the episode's premier, fans have taken to the hashtag #Wicked15 to express their excitement about the show's anniversary.

"Wicked taught us to always look for the other side of the story, to be fair and loyal, and to stand up for what’s right. All with an incredible soundtrack. Here’s to 15 more!" one fan tweeted.

"Today is the 15th anniversary to a show that means so much to me. The themes of friendship, acceptance, & owning who you are is inspiring. It has even been an important part of one my best friendships. @WICKED_Musical congratulations on 15 magical oztastic years," another said.

Even Playbill's official account got in on the hashtag, tweeting, "YALL AM I WILL BE TAKING THE REST OF THE WEEK OFF THE RECOVER IF YOU CARE TO FIND ME LOOK TO THE WESTERN SKY."

Musicals have a way of sticking with you. They're good to revisit on sad, stormy days, but also something you can sing along to with your friends. In its run so far, Wicked has clearly impacted many lives, from its cast members to its fans, and people cannot wait to see what it does next.