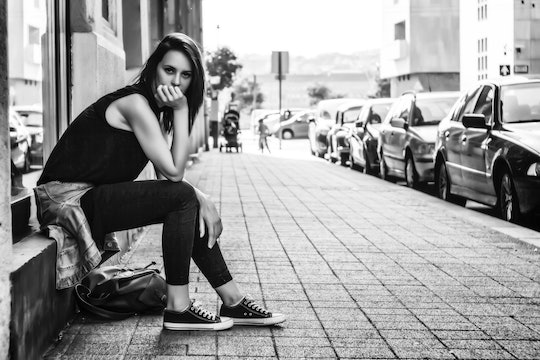 How To Safely Respond To Catcalling, Because It's A Major Problem

Catcalling: it happens small towns and sprawling cities; in the middle of the day and late at night. Far from a compliment, catcalls can be obnoxious, perplexing, and even scary. That's why it's important to know how to safely respond to catcalling when it does happen, because it affects most women at some point.

A few years ago, I took my car to get serviced and decided to cross the street to get a coffee. As I waited for the walk sign to light up, some dude in a car stopped in the middle of traffic and laid on the horn, screaming "Hey baby!" at me. He continued for some time until other drivers, fed up with his nonsense, honked and yelled at him to drive away. Not that it should matter, but I was dressed in jeans, a t-shirt, and — because I was recovering from tendonitis — orthopedic sneakers. Big honking orthopedic sneakers, the most sexless shoes ever manufactured. But even then, on a sunny Sunday street in the suburbs, I was catcalled while running errands in the most utilitarian outfit ever. At the time, I just stared at my feet and waited for the screaming guy to drive off, but perhaps a braver person could have rounded on him with some of these safe responses to catcalling. Because no one should have to deal with that nonsense while going about her daily life.

And, although I wish this weren't the case, here's a quick caveat: it's important that you assess your situation and ensure your safety before responding. Back-sassing some rude guy on a crowded street is one thing, but you may want to exercise caution if you're in a remote area or outnumbered by a group of people. Stay safe and implement this ideas on how to respond to catcalling.