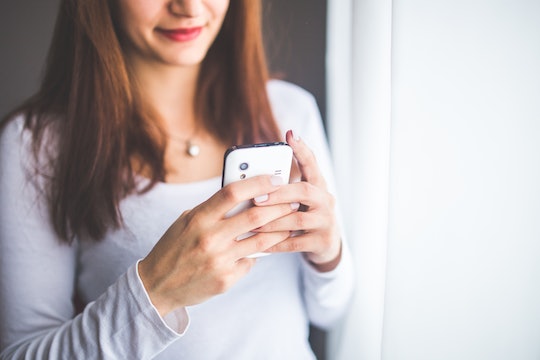 A Beginner’s Guide To Sexting

In the smartphone-surgically-attached-to-your-hand age — i.e. the age in which humans are currently living — productivity is prized. That means many people are casually answering emails while making dinner, texting to set plans while running through nightly routines with their kids, and Snapchatting, Facebooking, Instagramming, and tweeting as they do, well, everything. That leaves few moments for actual in-person interaction. You've got to make the most of the time you have, and sexting is a thing you can do to make that happen, but you have to do it right. That's why you need to know how to sext with your partner.

You might think that sexting is for people who are younger, in "more exciting" relationships, or just about anyone else who isn't you, but it's all about knowing how to handle it. You and your partner definitely have the capability to sext if it's something you both want to do, you just might need a little bit of guidance to be successful.

First let's talk about pictures. Even though everyone would like to believe that any nude or suggestive photos to your partner while sexting would remain strictly between the two of you, it's not necessarily a bad idea to try to protect yourself so that you won't be embarrassed later. According to Vogue, subtle, suggestive, tasteful photos are more effective when sexting. Additionally, you should only send nude photos to partners who have already seen you naked. If that doesn't apply, hold off on the nude photos until it does.

According to the website for Cosmopolitan, sending sexts to your significant other at otherwise inappropriate times, such as while they're sitting in a meeting, wandering the grocery store aisles, or standing in line at the post office, is also a good idea. The mismatch of the contents of the sext with your partner's surroundings makes things exciting. But, as sex therapist Dr. Liz Powell said in an interview for the aforementioned Refinery29 article, you should ask your partner for consent before continuing with a sext.

Additionally, giving your partner feedback that you like what they're saying can help keep things going, as Andy Duran from the Good Vibrations education department said in an interview with Women's Health. With the absence of in-person feedback, being vocal about what you're liking is extra important.

If you're not sure if sexting has any place in a long-term relationship, rest easy. According to the previously-mentioned Vogue article, sexting can help keep up the desire and eroticism that can sometimes fade a bit as your relationship becomes more everyday and you spend time together talking about who's going to do the dishes. Whether you've only been seeing each other a short time or you're in it for the long-haul, successful sexting can be a part of your relationship. All you have to do is pick up your phone.