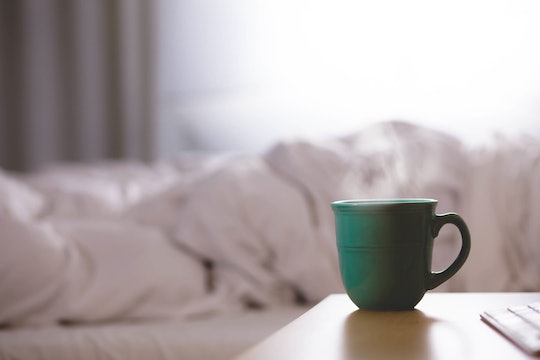 How To Sleep Through Morning Sickness

Early pregnancy is filled with many joys, but morning sickness is not one of them. Although there are plenty of jokes about moms-to-be getting nausea from just about anything, when you’re actually in the throes of morning sickness, it’s no laughing matter. After all, it can be difficult to maintain a sunny sense of humor when your digestive tract seems intent on turning itself inside-out. If, however, you can learn how to sleep through morning sickness, you just might be able to get through the worst of your pregnancy nausea while unconscious.

Morning sickness, which can strike at any time of day, may be caused by the tremendous hormonal fluctuations in early pregnancy, as explained by the Mayo Clinic. And it’s common as well: according to WebMD, around 90 percent of pregnant women have to deal with some version of the nausea or vomiting associated with morning sickness. But sometimes nibbling on crackers or sipping ginger ale doesn’t quite cut it.

Sleep might be just what you need to combat the nausea. For one thing, fatigue can make nausea and vomiting worse, so making sure you get seven to nine hours of sleep each night — and napping as much as you want — is one way to combat morning sickness before it starts, as explained in New Health Advisor. And according to the U.S. National Library of Medicine, you might also try to take your prenatal vitamins at night so you can sleep through any resultant nausea (the iron may cause stomach upset). Having trouble drifting off? Keep some bland snacks in your bedside table, as Health Day recommends, and nibble right before it’s time to crash. Pretzels or apple slices may be a good choice. If you’re really struggling to sleep, you might try a pregnancy-safe sleeping pill such as Unisom Nighttime Sleep-Aid may help you doze off. In general, sleeping through your nausea may be the easiest and most comfortable way to get through this rough phase of your pregnancy.