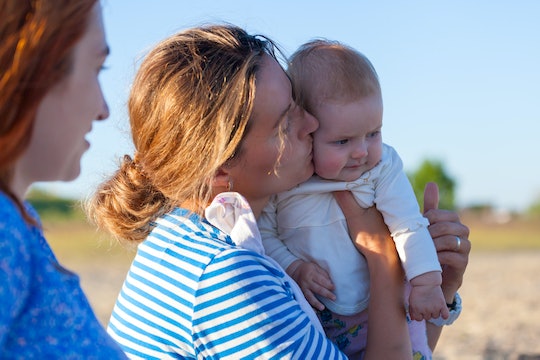 This mother of one decided to speak up when she encountered bigotry in the mall, and shares tips on how to confront hateful behavior.

"If you're gay, don't bother coming home because I won't let you in," the man walking in front of us in the mall said to his two kids.

His scruffy voice was filled with indignation.

"It's just not natural. It's not how we're supposed to be."

A woman, presumably his wife, flanked his right side as they walked and said nothing. The kids, roughly 10 and 13 years old, said something in response I couldn't quite make out.

I was just a few feet behind them with my wife and our 1-year old son. It was Pride Month and Father’s Day.

Seconds before this encounter, I had made note of the many stores that donned supportive rainbow messages. "We're all one," at the Gap; "Celebrate," at American Eagle; Bath and Body Works and Spencer Gifts all had affirmative LGBT signage prominently displayed. Surrounded by corporate-sanctioned support, this man spewing his homophobic rhetoric caught me extra off-guard.

It was also the first time confronting hateful speech with my child.

The activist in me sprung into action.

"You should watch what you say. You don't know who you might be insulting," I said to the man.

"Why don't you mind your business!" He barked back.

"If you speak loud enough for others to hear in a public place, it's fair game," I replied.

Whether helpful or not, I added, "Please don't fill those children's heads with that garbage! I hope they grow up to be more intelligent than you."

He proceeded to remind me that being "that way" is not normal (which frankly, wasn't really an insult to me, though he intended it to be).

We walked ahead of them and away at that point, but not before my wife yelled after them, "Happy Pride!"

This was by no means the first time I had encountered homophobia, and as a life-long activist, I have no problem speaking up. It even invigorates me to counter ignorance.

But this time was different. I was visibly shaken up and I didn't immediately understand why. I had been followed before, threatened physically, attacked legally, yet remained vigilant and less daunted than I felt in this moment. The man hadn't even specifically targeted me. He didn't appear to be violent. Why, then was I so feeling so hurt?

And then I realized it was because it was my first time facing hate as a mom, with my baby in tow, no less.

This was a whole new ballgame. And we are living in a while new era, a bipolar one in which formal institutions like corporate brands have never been more inclusive, but Trump-aligned straight, white men (and others) have a renewed voice to air their bigotry. I hadn't felt this afraid to be LGBT since I came out in the late ‘90s and the fate of 23-year-old Matthew Shepard, who was beaten and set on fire in Wyoming by two assailants, loomed large.

We aren't shying away from active and vocal activism in front of our daughter.

I know I'm not alone in feeling more vulnerable, and I know LGBT people haven't been targeted as severely in this country as of late as have immigrants, black and brown people, even Jews. I also know that it's more important than ever for us to speak up when we see or hear something harmful, but I have to proceed differently as a mom than the boisterous 19-year-old me would have.

“As a general parenting rule, we aren't shying away from active and vocal activism in front of our daughter, and in fact, encourage it,” says Erica Manney, the New York-based mom of a 3-year old, who recently called out a cashier with her daughter in tow for assuming a family in line in front of her was using food stamps (WIC) to pay for their groceries because their skin was brown (they weren’t).

“It's our job to push on that arc of justice, and also, at the basic level, it's living what we teach every child — the golden rule. We have to stand up for people, and treat people with respect.”

"The welfare and well-being of ​youth, for us, is priority one, especially ​now when ​they're hearing divisive language all too often,” says Diego M. Sanchez, Director of Advocacy, Policy, and Partnerships at PFLAG National, the nation's first and largest organization for families and allies of LGBTQ people.

“Responses might vary across marginalized communities — including people of color, LGBTQ+, people with disabilities and others — but the key things to do in any situation are to assess the ​safety of the situation for both you and ​your child; decide whether to address the incident in ​your child’s presence​,​ ​reacting and responding​ in the moment only if it’s safe to do so; be well-versed on the subject matter at hand; and talk ​openly and honestly ​with ​your child to hear their perspective on the experience as you inform them of yours."

So what do we do when we face hate with our kids in tow? Follow these tips to keep your family safe while not staying silent:

Safety first. If speaking up puts you and your child in harm's way, then it's better not to engage. If someone else is in harm's way, get authorities or others involved. Document the incident from a safe distance.

Know your audience. If you're trying to convince someone their words or actions are discriminatory, try to meet them where they are with plain language and using examples that relate to their lives that they can understand. Or simply ask them why they believe what they believe with open-ended questions that challenge them to think. The majority of small-mindedness comes from a lack of exposure to diversity, and speaking in convoluted or theoretical terms will only alienate them further.

Practice your approach. The hardest thing to do when facing hate is to stay calm. It's really easy (and reasonable) to be thrown off by an encounter and to escalate to anger. Have some good one-liners rehearsed during a moment of calm before anything happens so you can default to it in a heated moment without losing your cool. This is especially important with your kid present, as it will make the difference between educating them about how to handle tough situations and validating flying off the rails.

Have an exit strategy. Before deciding to engage with said hater, give a quick glance around at your setting. Are there others to bear witness? Is there more than one way to exit your location if safety becomes a concern? Always keep a "Have a great day," in your back pocket as a method to diffuse and end the encounter, followed a brisk exit.

Talk with your child after. It's hugely important to take the time to talk to your child after encountering discrimination or harassment. Ask them how they're feeling and explain in simple terms that some people don't like other people, and we will always stand up for what we believe in and be proud of who we are. Teach them about safety and lead by example.

It’s not always clear how react to what we’re seeing and hearing, but our response does matter when our children are watching. Our children, and their children, too.