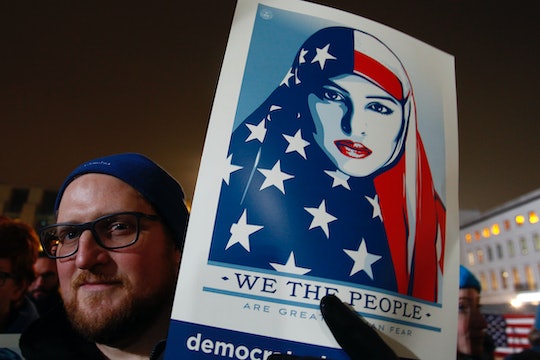 How To Stay Safe At The Women's March

The Women's March on Washington will be held on Saturday morning in protest of Donald Trump, his administration, and the seeds of hate his campaign sowed. More than 600 sister marches are planned in every U.S. state, and in countries throughout the world. It's important to plan ahead so you can stay safe during the Women's March, and other protests that are sure to come in the near future.

Amnesty International advises wearing shoes you can run in, and clothing that covers as much skin as possible, to protect yourself from from both the sun, and tear gas. The Women's March is a legal event with proper permits, so participants shouldn't automatically expect negative encounters with the police, but a few bag eggs can turn a peaceful protest into a riot, so it's makes sense to prepare for tear gas or pepper spray by carrying swim goggles and a scarf or bandana to cover your nose and mouth. Soaking the fabric in lemon juice, vinegar, or water can help filter out chemicals. There have been rumors that counter-protesters are planning to infiltrate the march, perhaps in order to cause conflict and get the march shut down. Do not engage with them, no matter what they say or do. If you feel unsafe, move calmly towards a police officer, or an event marshal.

It's also important to know your rights in case you are confronted by police. According to Self, you are required by D.C., law to give your name if an officer asks for it. Other than that, don't say anything that could be used against you, and don't consent to being searched. Ask if you're free to go, or if you're under arrest. If you are free to go, walk away. If you're under arrest, do not resist. Ask for a lawyer and go peacefully. If you don't have your own lawyer already, the Women's March, in conjunction with the National Lawyers Guild, has set up a legal hotline: 202-670-6866. Write that number on your arm in permanent marker, along with your emergency contact and any pertinent medical information, such as allergies and blood type.

Finally, be prepared for the very real possibility of a stampede. Hundreds of thousands of people are expected to attend the march, and people have been trampled to death at much smaller demonstrations before. Be vigilant of the energy around you. Stay to the sidelines in case you need to make an exit in a hurry. If a stampede does break out, look for a sturdy object to shelter behind, like a monument, a tree, or a car. Do not rely on a fence or barricade to protect you. Finally, if you do get caught in a stampede and you're knocked down, the best way to protect yourself is to lie on your side in the fetal position. These things aren't fun to think about, but being prepared could save your life.