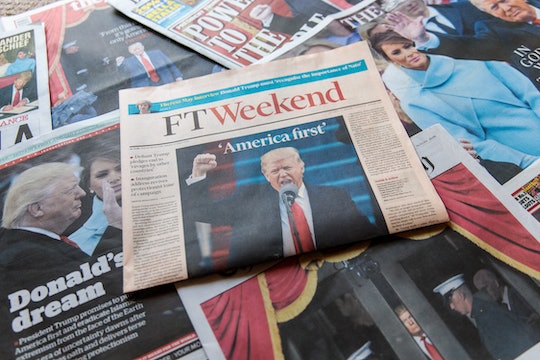 Yes, my friends, political news anxiety is a real thing. And, if there was any doubt before, the first five days of Donald Trump’s presidency have certainly proved it. Within minutes of taking his presidential oath, Trump went to work on directives fulfilling his worst campaign promises — everything from dismantling the Affordable Care Act to erecting that stupid wall between the United States and Mexico. And when he wasn’t signing insane orders, he was saying insane things: accusing the press of misreporting his inauguration crowds; calling for martial law in one of America’s largest cities; threatening to strip funding from cities who dare to opt-out of his immigration bans; and claiming — falsely — that “millions of illegals” had somehow cast ballots for Hillary Clinton during the election. Bolstered by the conservative climate, several states announced legislation this week that would chip away at abortion rights and free speech.

It’s been a rough week, you guys. For those of us who consume much of our news via television and social media, staying sane in the minute-to-minute stream of rotten headlines might seem impossible. But trust me, it isn’t. There’s a simple thing you can do to stay calm but informed in a Trump presidency.

I totally get the need to stay aware of what’s happening in the news. As a former political appointee and a self-confessed news junkie, I would be watching the White House like a hawk even if Trump wasn’t in office. But, with our new president seemingly hell-bent on criminalizing, dehumanizing, and disenfranchising entire populations of Americans, watching the news the last few days has felt downright triggering.

But four years is a long time, people. And staying in a constant state of rage and/or panic just isn’t healthy. More than that, it makes it impossible to be an effective, engaged activist (if that’s where you’d like to put your energy). So, if you want a good strategy for staying aware and informed without losing your mind, here it is.

No, really. It’s sounds simple, but let’s unpack it a bit. Watching the news on television is about consuming information as it comes; the topics, the pace, even the breaks are determined by the outlet, not the viewer. For the six in 10 Americans getting news via social media, the experience has become shockingly similar: with Facebook, Twitter, and Instagram moving toward live video feeds and automatic playback of videos on your timeline, actually choosing what to watch and when is no longer a given. We won’t even get into the problem of fake news on Google and Facebook.

Reading the news — actually choosing a publication and deciding which article to peruse — produces an entirely different experience. It’s easier to control the flow of information. The reader gets to decide when to dig deeper and when to move on to the next thing. Finally — and this is crucial for those who find themselves arguing right along with panelists on cable news — there are no commentators fighting over the “right” way to interpret the headlines. That alone is an easy way to lower the blood pressure.

America has almost gotten through its first full week with Donald Trump in the White House. And for many of us, it has been a week of stress and anxiety. But with just over 196 weeks left until the next presidential election, this is a marathon, not a sprint, people. Self care is going to be important. If that means unplugging (or turning down the volume) from your news feeds every now and then, there’s no shame. If this week is any indication, the insanity isn’t going anywhere for a while.