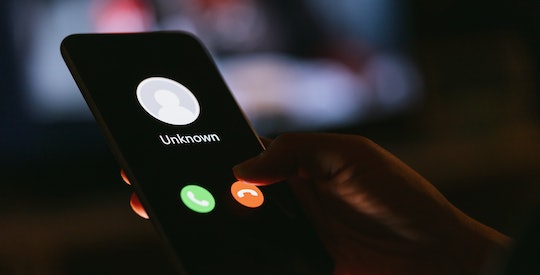 Got An iPhone? Here's How To Stop Those Annoying & Incessant Robocalls

There's nothing worse than picking up your phone for a call only to have it be a robot on the other line. Spam calls are not only super annoying when you're anticipating an important call, for instance, but they're also a huge waste of time. So if you, like so many people, are looking for tips on how to stop robocalls on the iPhone, there are a few things you could try to keep your phone as peaceful as possible.

When Apple releases the newest software update, iOS 13, next month, iPhone users will be able to take their phones to "a new level", according to Apple, and one of the new features aims to curb those annoying calls. In September, as Forbes reported, iPhone users will get to utilize a new feature that will stop robocalls from happening at all. Yes, it will banish any unknown callers from dialing your phone.

This new setting, which will be optional to turn on, will protect users from "unknown and spam callers," according to Apple. This feature will send any unknown caller automatically to voicemail, giving phone users some major peace of mind.

It gets even better; the new software update will use "Siri intelligence" to scan from the numbers stowed in messages, mail, and contacts. If the incoming call doesn't match any of those numbers, then it will automatically send them to voicemail. This way, that call from your new coworker whose number you have not saved yet will go through, while that annoying robot who is trying to get you to update your home security system won't get through. The call won't even pop up on the screen of your phone, according to The Verge.

This feature won't be released until iOS is released to the public, likely in September, according to Tech Radar. But until that day comes next month, there are a few other ways that iPhone users can already prevent picking up spam calls, if they haven't implemented these tactics already.

There are third party iPhone apps (ones not made by Apple) that will weed away calls for iPhone users. Phone carriers, AT&T and Verizon have their own free apps that that will block and report spam callers. These apps also have upgrades that users can pay for that offer more ways to identify exactly who is calling, according to Forbes.

There are also other apps that are unaffiliated with your service provider. For example, Robokiller: Spam Call Blocker is a free iPhone app with stellar ratings that claims to reduce unwanted calls by 90 percent over 30 days. Impressive.

But if users don't want to have to deal with having another app on their phone, there are other quick and easy hacks to reduce the amount of spam calls you get. Once a spam number calls users phones, all you have to do is go into your recent calls list and click "block" so these numbers don't call again, as Business Insider notes.

Turning on "Do Not Disturb" through the iPhone settings is also a really easy way for users to silence calls. iPhone users have to turn on this feature through their settings and click on "Do Not Disturb", according to Forbes. Once they do that, they can scroll down to "Phone" and choose the option to allow calls from all contacts. This is considered to be a more "extreme" solution, according to USA Today, but will definitely ensure that no unwanted calls get through.

With these tactics in play, people will no longer have to field calls from telemarketers and robots, and only answer the calls they want to be getting.