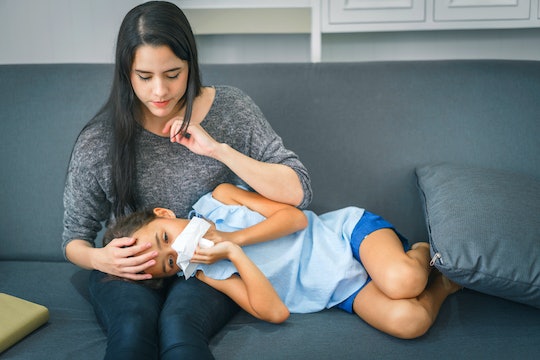 Kids Are Dying From The Flu: Here's What To Do Right Away If Your Child Gets Sick

This year’s flu epidemic is turning out to be one of the worst in recent history, and it’s all due to the intensity of the season’s predominant influenza strains. People all over the country, children and adults alike, are falling ill, being hospitalized, and many have even lost their lives. If you have children, you’re probably anxious, so you should know how to stop the flu early in kids.

There is one first, main line of defense, and it’s pretty easy to come by. In an interview with Romper, Pennsylvania pediatrician Dr. Jarret Patton says that if your family still hasn’t gotten their flu vaccine, there is still time. “Although this year's vaccine is only about 33 percent effective,” says Patton, “it is still preventing a significant amount of severe illness.” He says that most people would buy a lottery ticket if they were told they had a 33 percent chance of winning, so getting a vaccine shouldn’t be any different.

You may have gotten by without a flu shot for years, but this year’s epidemic won't be so easy to breeze by. I usually never get sick, but the flu hit me like a ton of bricks this year. The reason people are getting so ill is because the flu strain this year is particularly virulent, explains Patton, spreading easily and causing more significant symptoms. "This year's flu season is very active and widespread throughout most states,” says Patton, “and there have been many children that have fallen victim to the flu and unfortunately lost their lives."

Because the flu shot can't protect you from the flu 100 percent, to keep your kids safe, you should keep an eye out for early signs of the flu. The family of Keyona Richardson, a 10-year-old in Colorado who is in the ICU battling flu-related pneumonia and lung collapse, told WQAD 8 Fox News that parents should not wait to take their children to the doctor if they see signs of illness. Catching the flu early can make all the difference in keeping your kids safe.

What are the early symptoms of the flu to look out for in children? Along with looking for signs of fever, sore throat, runny nose, cough, muscle aches, nausea, stomach pain, and vomiting, pediatric nurse practitioner Patsy Stinchfield told The Washington Post that parents should bring their kids to the doctor if they notice an aversion to drinking, lethargy, or if their kids seem to get well and then worse again.

When you do get to the doctor’s office, your child will probably be tested for the flu. The most commonly used test is the rapid influenza test, says Chicago area pharmacist Bineesh Moyeed. She tells Romper that the doctor will swipe a long cotton swab inside your child’s nose and then run a quick 10 to 15-minute test on their nasal secretions to detect if a flu virus is present. Even if the test is negative (it can produce false positives), if your doctor sees symptoms of the flu in your child, Moyeed says you may be given an antiviral that could help reduce symptoms and shorten the duration of the flu.

Unfortunately, I know too many parents that try to get by cold and flu symptoms by dosing their kids with Motrin or Tylenol every four hours. But with the severe complications this year’s flu strains are causing, it’s not worth the risk. If your kids are sick, take them to the doctor for testing and evaluation as soon as you can, and definitely do not send them to school. The only way to help keep this flu from spreading is to keep sick kids home and make sure to teach your entire family about the importance of washing their hands and covering their coughs or sneezes. When it comes to your kids and their well being, it’s always better to be safe than sorry.