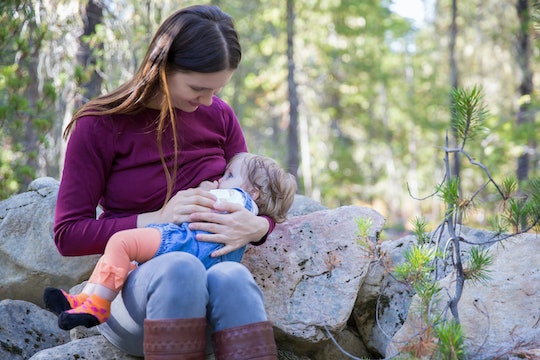 How To Keep A Breastfed Toddler Away From Your Top

Toddlers are a handful in every aspect of life. Whether it's heading to the park, putting them in bed, or breastfeeding, people don't say "terrible twos" and "threenager" for no reason. It's this behavior that makes extended breastfeeding tough. And, oftentimes toddlers will start the habit of helping themselves. So, you may start wondering how to stop your breastfed toddler from reaching under your top in public.

Regardless of what age your child is, breastfeeding will always have its challenges. From finding ways to ease nipple pain to wondering why babies fidget when breastfeeding, it can easily seem like it's always something. But when it becomes an issue of your toddler feeling the need to help themselves whenever, that can be embarrassing and frustrating. It may be fine at home, but for most moms, having their shirt lifted up in public is probably on the list of terrifying things they never want to endure.

If it's happened to you (and it probably has if you're breastfeeding a toddler), do not worry. There are some ways that you can combat your toddler's habit in public and refrain from accidentally flashing aisle 30 at your local Target.

When you find that your toddler is starting the habit of helping themselves, whether at home or on the go, it's best to start a new routine. It's OK to let them know that behavior isn't acceptable, according to Breastfeeding Basics. Calmly stop them from reaching for your shirt and have a conversation. Explain that before they help themselves, they need to start asking politely. Just like when they want a snack or drink, asking nicely is the correct way to go.

Sometimes asking and teaching new habits isn't instantaneous though. In which case, there are a couple other ways to get around your toddler reaching up your top in public. Alpha Mom suggested taking your toddler's hand and moving it elsewhere. You can accompany this action by saying, "no thank you," as well. The previously mentioned Breastfeeding Basics article also stated that it's important to stay firm. When you're in public, sometimes it's a place where toddlers feel they can test their limits. Being consistent and not giving in is a must because older babies are able to learn and wait when needed.

In addition to the above suggestions, sometimes it's just simply a good idea to remember that toddlers and babies often turn to breastfeeding for comfort. Coming up with fun games to distract them or offering some comfort and love in another way may be your easy fix when they start to reach for your shirt. Or at least help in diffusing during the learning process.

With some patience and the above tactics, it is totally possible to stop or avoid your toddler's hand in your shirt in public. As babies grow, it's natural that they fidget and find ways to get their milk fix – breastfed or not. And if their tactic is to mess with your shirt in public, there's absolutely nothing wrong with nipping that behavior in the bud as quick as possible.