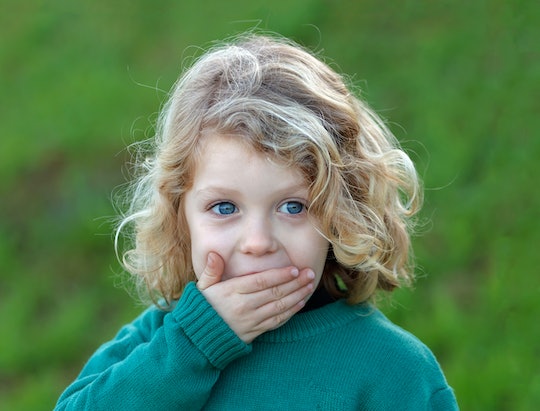 How To Stop Your Toddler From Cursing, According To An Expert

I was walking down the sidewalk with my son, his pudgy 3-year-old hand in mine, when a nearby driver honked their horn. Out of nowhere, and to my horror, my son responded, "Hey, you f*cker!" Nearby pedestrians stopped and stared, my partner looked at me in complete consternation, and I swear, right and there, a piece of my soul died. The second we got home I Googled "how to stop your toddler from cursing," because sure tiny humans screaming four letters words is funny... until it's your tiny human screaming four letter words. Then? Yeah, not so funny.

In order to learn how to stop your tenacious toddler from cursing, you should first learn why those four letter words are so appealing. "Boys and girls curse because it makes them feel older and sometimes a little naughty," Maureen Healy, author of The Emotionally Healthy Child, and child development expert at Growinghappykids.com, tells Romper. That doesn't mean your child has any clue as to what they're actually saying, though. Instead, according to Healy, your child watches your reaction to those specific words, and if they can elicit a response that appeals to them, they're sure to say those "naughty" words over, and over, and over again.

"If you can stay neutral while they use a curse word, he or she will not think it's that bad," Healy explains. "But when your eyes get really big, and you say, 'Never say that again,' they realize — wow, that word has power, and I can embarrass my mom when I say it."

Healy recommends parents take away the perceived power of these words by minimizing their reactions and, instead, "provide gentle correction that said curse word isn't used at school or in public places."

Healy also recommends giving a child what she refers to as a replacement word. "I use the word 'frog' instead of the other F-word, and it makes children chuckle," she says. "We still recognize the humor when I say, 'Shut the frog up,' yet it doesn't have the power of an expletive." According to Healy, this approach is particularly helpful when children start attending school and, as a result, learn about curse words via their classmates.

Focus on where certain words are OK to be used, and where they're not.

Providing an alternative also helps you avoid the pitfall of teaching your child that certain words are "bad," Healy says. "The word 'bad' isn't a helpful word to use relative to language," she continues. "I would focus on what's helpful (or appropriate) and what's unhelpful (or inappropriate) language to use at home, church, out with friends, and at school." Healy does acknowledge that every family has rules and actually loves the idea and use of a "curse jar," especially because, as Healy says, "Usually, the adults spend the most in the curse jar, but sometimes children contribute mightily to it as they learn, too."

Just like adults, children can also learn to curse as a way to express a specific emotion, like anger or frustration. "Everyone feels anger and needs a constructive outlet," Healy says. And while cursing can provide an outlet for those feelings, Healy says it's only constructive if it's done in the privacy of your home, and not in public or at someone.

And, of course, there are plenty of other ways that your child can learn to safely, and appropriately, express their feelings. "There's endless ways that young children can express themselves via creativity (coloring, legos, dancing, playing the piano) to physical outlets (hitting a punching bag, jumping on a trampoline, jumping rope, swimming in the pool under supervision)," she says. So if your child cursing is particularly upsetting, you can encourage the aforementioned expressions and outlets instead of the use of, um, "colorful" language.

In the end, your child learning new words is a good thing. And part of that learning process is learning which words are appropriate to use (or to use in certain settings, depending on a family's personal rules) and which words aren't.

"Toddlers are learning words and I would simply remain neutral about the curse words — to the best of my ability — and that's what I recommend to others," Healy says. "Focus on where certain words are OK to be used, and where they're not. Maybe you let your child say anything in the living room, but say, 'This word doesn't get used outside the house. It's not appropriate at school or on playdates.'"

More Like This
How To Stop Breastfeeding A 2-Year-Old
30 Easy Summer Activities For Kids That Work Rain Or Shine
The Covid Vaccine For Kids Under 5 Has Been Sent To The FDA For Review
Should Parents Consider Delaying Covid Vaccines Until Closer To School Starting?