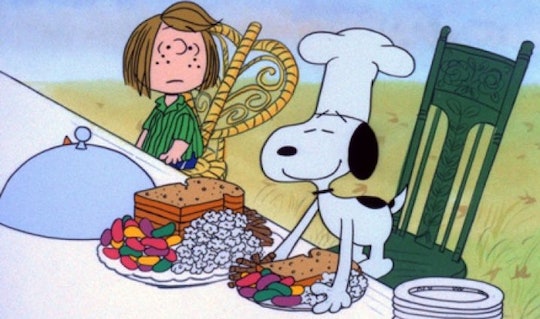 Here's How To Stream 'A Charlie Brown Thanksgiving'

Unfortunately, the full movie is somewhat difficult to find on any streaming service. It's nowhere to be found on Hulu or Netflix, but you can purchase it on Amazon Video or iTunes for $12.99 or on VUDU for $9.99. This edition also includes two bonus episodes: "The Mayflower Voyagers" and "Play It Again, Charlie Brown." If you're unfamiliar with these two episodes, "The Mayflower Voyagers" is a segment from the 1988 miniseries This Is America, Charlie Brown, and "Play It Again, Charlie Brown" follows Lucy's attempts to get Schroeder to play the piano at a PTA meeting.

If you'd like to watch for free, you can also find A Charlie Brown Thanksgiving on YouTube, however the video quality isn't the best so you may just want to purchase it. Alternatively, you can also catch the special episode live on ABC on Wednesday, Nov. 22 at 8 p.m. EST, the day before Thanksgiving. If you have a DVR you could record the episode so that you and your loved ones can watch it on Thanksgiving, rather than on the day before. This showing will also include "The Mayflower Voyagers" thereby giving you a full hour of Peanuts fun.

You can also purchase a DVD of A Charlie Brown Thanksgiving from Amazon for $10, but you'd better hurry and order soon so you have it in time to watch on the holiday. Besides that, those are really your only options.

No matter how you watch, you should definitely check out A Charlie Brown Thanksgiving. The short film is a true classic and even won an Emmy Award for Writing when it first premiered. The show is the third Peanuts holiday special to be made, after A Charlie Brown Christmas (1965) and It's the Great Pumpkin, Charlie Brown (1966). In this special, Charlie Brown attempts to host a Thanksgiving dinner after Peppermint Patty invites herself and her friends over, but it goes all wrong. Rather than the traditional Thanksgiving food, the kids are served two slices of toast, some jellybeans, pretzels, and popcorn, prepared by Snoopy, Linus, and Woodstock.

Unsurprisingly, no one is really impressed by the meal, but in the end the Peanuts gang is still able to come together and have a great Thanksgiving, after Charlie Brown and Sally's grandmother invite the whole gang over for Thanksgiving at her house.

The episode is also well remembered for Linus' memorable prayer, in which he recounts the history of the first Thanksgiving. Then, of course, there's the iconic moment in which Lucy tricks Charlie by having him run up to kick a football and then pulls it away at the last second so he falls. Although it's certainly mean, it still makes fans laugh year after year.

But this isn't the only way you can incorporate your favorite blockhead into your holiday feasting. You'll be able to can catch Charlie Brown's balloon in the 91st Annual Macy's Thanksgiving Day Parade, which will air live on NBC at 9 a.m. ET Thanksgiving Day. Once Then, once Thanksgiving is over, you can look forward to A Charlie Brown Christmas, which is just as heartwarming and funny as the Thanksgiving special, if not more so.