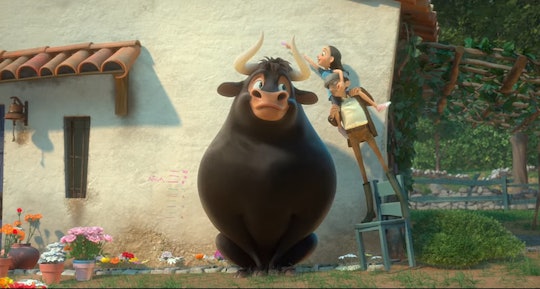 Everything You Need To Know About How To Stream 'Ferdinand'

The Animated Feature Film category at the 2018 Oscars is a good mix of diverse films with interesting stories. One of those films is Ferdinand, which follows the story of a bull named Ferdinand who is mistaken for a dangerous beast and is torn away from his family and best friend, Nina. Together, with the help of his new friends, he ends up on an adventure to get back home. If you haven't seen the movie yet, here's how to stream Ferdinand, so you and your family can watch this adorable film over and over again.

Unfortunately, Ferdinand isn't on Hulu or Netflix, at least not yet, but you can purchase it from Amazon Video or iTunes for $19.99. If you want to save yourself a little money, iTunes also has a movie bundle with Ferdinand and The Peanuts Movie for $24.99, so you just pay a little more for two films instead of one. Otherwise, that's the only way you'll be able to stream Ferdinand. However, if you're looking for an even cheaper option, you could always buy the DVD from Amazon for $17.96. That way you would own it forever and see it as many times as you want. No matter how you watch it, you should definitely see this movie.

The story, which is based on the picture book, The Story of Ferdinand by Munro Leaf, is very cute and heartwarming. The film also has an all-star cast that includes John Cena as Ferdinand, Kate McKinnon, Anthony Anderson, Peyton Manning, David Tennant, Gina Rodriguez, Daveed Diggs, Boris Kodjoe, and Gabriel Iglesias.

While the film didn't do too well at the box office, it was a hit in the reviews department, scoring a 71 percent score on Rotten Tomatoes amongst critics (it's score was a bit lower in the audience category, coming in at 49 percent). Plus, besides its Oscar nomination, it was also nominated for Golden Globe. So it's obviously worth at least one watch.

At the Oscars, Ferdinand is up against a lot of great films, including The Boss Baby, which stars Alec Baldwin; Coco, Disney-Pixar's hit film about an aspiring musician who finds himself in the Land of the Dead; Losing Vincent, the only nominated film done in oil-painted animation; and The Breadwinner, which is based on the best-selling novel by Deborah Ellis and executive produced by Angelina Jolie.

Coco, which recently won the Golden Globe against all the same competitors, is definitely the top contender in this category. If it does win, it would continue Disney's five-year winning streak. If Ferdinand wins, however, that would be monumental. Blue Sky Studios, the animation studio behind Ferdinand that operates under 20th Century Fox, has never won an Oscar, though its films, like Rio and Ice Age, have been nominated a few times. That being said, you never really know. At the Oscars, anything is possible and the night is sure to be full of surprises, though hopefully not as surprising as last year's envelop debacle for Best Picture.

To find out who wins, make sure to tune in to the 2018 Oscars on Sunday, March 4 at 8 p.m. EST on ABC. This year the show is hosted once again by Jimmy Kimmel and will include a number of incredible performances of all the original songs nominated this year as well a number of A-list presenters. Suffice to say, the show should be a fun and entertaining, and one you definitely won't want to miss. So check it out and see which of your favorite movies takes home the Oscar.