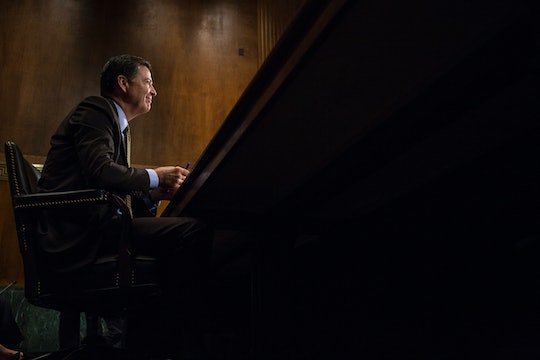 How To Stream James Comey's Hearing

Fired former FBI Director James Comey will testify before the Senate intelligence committee on Thursday. Unsurprisingly, many are treating the event like a must-see, live TV premiere, following his dramatic firing earlier this year. In case you're wondering, here's how to stream James Comey's hearing, because chances are that everyone's going to be recapping it after the fact, play-by-play.

The drama intensified when President Donald Trump fired Comey about a month ago, as Comey was leading the investigation into the Trump administration's potential ties with Russia — ties that may have possibly influenced the outcome of the 2016 presidential election. The official White House announcement on Comey's dismissal claimed that the initial decision to terminate the former director stemmed from the fact that Comey mishandled the investigation into Hillary Clinton's emails. Still, the link between Comey's investigation and Trump's relationship with Russia can't be ignored; A few days after the Comey's initial release, Trump admitted that "this Russia thing" was on his mind when he made the decision fire the former director.

Comey also wrote a memo, which he released after his firing, indicating that Trump had asked him to cease investigation into former National Security Adviser Michael T. Flynn, with Trump allegedly asking: "I hope you can let this go." The validity of this document will likely be questioned on Thursday, in attempts to determine whether or not Trump tried to "influence or impede" the FBI — a pretty serious allegation against the president.

So you can easily see why so many people are interested in hearing Comey's side of the story. Slated to start at 10 a.m. Eastern Time on June 8, the testimony can be viewed on a number of news sites, PBS, C-SPAN, and CNN included. The embedded YouTube stream below will also go live at that time, complete with a chat function for anyone looking for a bit of discourse on the matter.

According to two White House sources, Trump will reportedly live-tweet Comey's testimony "if he feels the need to respond," Robert Costa of The Washington Post reported on Tuesday. Though Press Secretary Sean Spicer insisted that the president's schedule is full that day, Trump's tendency to always seek out the last word nearly guarantees he'll be live-tweeting, or at the very least posting a Twitter-rant, post-testimony, amping up the drama that much more.

Though the public is getting a pretty exclusive look into Comey's testimony on Thursday morning, they still won't see everything; After the open session is streamed, Comey's closed session will take place. Still, many hope that this will help bring the truth to light. Sometimes, what isn't said can carry just as much weight as what is said.