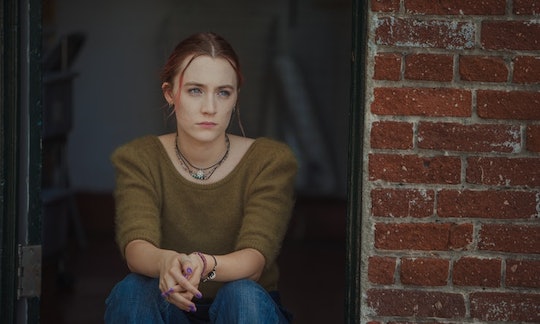 How To Stream 'Lady Bird,' So You Can Stop Feeling Out Of The Loop

The 2018 Golden Globes air Sunday, Jan. 7 and the nominees are all incredible. One of the top contenders this year is the film Lady Bird, which tells the coming of age story of Christine "Lady Bird" McPherson, a 17-year-old living in Sacramento, California in the early 2000s. Before you tune in to see how many awards the film wins, here's how to stream Lady Bird so you can engage in conversations about how amazing it is.

Before you go straight to streaming, though, it's worth noting that you can still see the movie on the big screen. Lady Bird is still showing at select theaters and with a Rotten Tomatoes score of 99 percent, this movie is probably one you'll want to see with a huge bucket of popcorn and packet of junior mints. However, if you can't make to the cinema, you can preorder the film on either Amazon Video or iTunes and get it when it's released. Unfortunately, there doesn't appear to be an official release date yet, so you may have a bit of a wait ahead of you. And to make matters more frustrating, that's the only way to stream the film.

That being said, you can listen to the movie's soundtrack wherever you listen to your music, whether that's Spotify, Apple Music, Amazon Music, etc. While it's obviously not the same as watching the film, it will put you in Lady Bird's headspace, which is such an interesting place to be.

Lady Bird is up for four awards at this year's Golden Globes, including Best Screenplay for writer Greta Gerwig, Best Supporting Actress for Laurie Metcalf, who played Lady Bird's mother, Marion, Best Actress in a Musical or Comedy for Saoirse Ronan who plays Lady Bird, and Best Motion Picture — Musical or Comedy. Lady Bird is definitely the lead contender to win for Best Motion Picture, though others argue Get Out, Jordan Peele's satirical film on racism, should win instead. Also nominated in the category are The Disaster Artist, The Greatest Showman, and I, Tonya.

As for the other categories, it's never easy to say which way the Golden Globes will go. Ronan is up against a great group of actresses, including last year's Golden Globe winner, Emma Stone. Still, Ronan's performance in Lady Bird is not only Golden Globe worthy, it's Oscar worthy. It'd be shocking if she didn't win, but this isn't the Oscars and the Golden Globes have always forged their own path when it comes to choosing its winners.

For Metcalf, this is her third Golden Globe nomination, but her first in a film category, and her first in over 20 years since was nominated for her role in Roseanne. Although Metcalf's performance was phenomenal, she too is in a tough category going up against Mary J. Blige, Hong Chau, Allison Janney, and Octavia Spencer. Still, Metcalf could end up walking away with her first Golden Globe. You'll have to tune in to see how it plays out.

Speaking of firsts, Lady Bird is Gerwig's first film, which she not only wrote but directed, though this isn't her first Golden Globe nomination. Back in 2014 she was nominated for Best Actress in a Musical or Comedy for her role in Frances Ha. Although people were excited by Gerwig's nomination this year, they were also disappointed that she also wasn't nominated for her directing and that no women were nominated in that category at all. Still, the fact that this was Gerwig's first movie and it's done so well is quite an accomplishment and it'd be great if this was her first Golden Globe win.

You can see how many awards Lady Bird takes home when the Golden Globes air this Sunday, Jan. 7 at 8 p.m. EST on NBC.