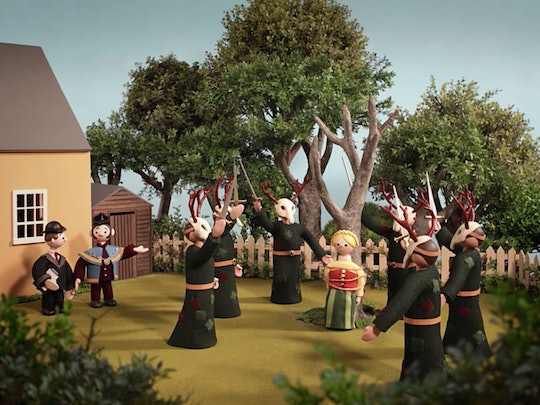 How To Stream Radiohead's 'Burn The Witch,' Because Fans Have Been Waiting Since 2003

Radiohead finally released its long-awaited song, "Burn the Witch," on Tuesday, and the internet is freaking out about it. Not only has the band has been teasing this song since 2003, but it's also the first song off of its ninth studio album, so the hype is pretty justifiable. If you're curious about this song, here's how to stream Radiohead's "Burn the Witch" and finally satisfy your curiosity. If you're a Radiohead fan, you've only been waiting for this song for about oh, I don't know, 13 years?

Luckily for everyone, Radiohead hasn't done any of that silly partnering with a streaming service, so "Burn the Witch" is available everywhere. (I know, it feels like a trap, right?) You can stream the audio on iTunes, Spotify, or TIDAL, and Radiohead promptly released a creepy little music video on YouTube that's free for everyone to watch. (I like your policies, Radiohead.)

Speaking of that music video: If you recently heard that Radiohead's newest single had a stop-motion music video, like I did, you might have gotten a bit excited. Stop-motion, you might have thought — that's like Chicken Run and Shrek, right? Wrong, and the song's title, "Burn the Witch," should have given you a hint as to why.

The video is a clay-motion remake of a British horror film from the '70s, called The Wicker Man. In it, a policeman goes to an island to investigate a girl's disappearance, only to discover that the island was not what it appeared at first glance, ending in the policeman's death in a pagan sacrifice. Radiohead's music video — and song — seem to capture that same mystery and sense of unease. The lyrics could be taken as a criticism of society's acceptance of anything considered normal or "right" (be it witch burnings, mass surveillance, or lack of sensible gun regulation) as long as the masses appear to agree.

A review in The Atlantic suggests that "Burn the Witch" lyrics could even be about our fear of contributing to discussions when social media witch hunts run rampant:

The lyrics appear to be skirting around the surveillance society, but equally they might be meditating on the difficulties of open discussion in an age where thought is scrutinised and policed by the public itself on social media, where any idle thought runs the risk of seeing one condemned as #problematic.

Regardless of how you interpret the lyrics, there's no denying that Radiohead is back with the band's signature sound and ability to make you question the status quo. And is anyone else slightly impressed that Radiohead held off for a slightly witchy 13 years before playing "Burn the Witch" for fans? Now, I'm off to go watch Chicken Run and pretend the world is still a nice place.