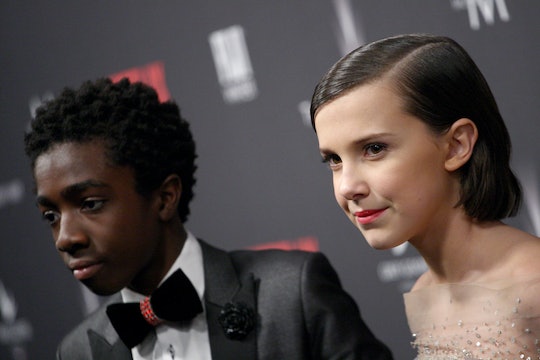 Here's How To Stream The 2018 Golden Globe Awards

The 2018 Golden Globes are here, which means it's time to see which of your favorite movies and TV shows walk away with the most awards. This year will be particularly tough because there are so many incredible nominees. The Golden Globes will be airing on NBC, as always, but for those of you who don't have a TV, you may be wondering how to stream the 2018 Golden Globes.

Because the awards ceremony will be on NBC, you can live stream the event on NBC.com, however you will need to log in with a cable provider. Another alternative is to use a paid streaming TV service like Sling TV, Hulu Live TV, or YouTube TV, that have NBC in order to stream the show. Most of the services do also have a free trial. Unfortunately, those appear to be the only ways you can live stream the actual award show, but you can live stream the red carpet pre-show on Facebook this year. Last year it was done by Twitter, allowing viewers to tweet questions for the celebrities walking the carpet. With the red carpet now airing on Facebook, questions for the stars will, of course, come from Facebook's platform instead.

The two-hour event will be exclusively available on the Golden Globes Facebook pages from 6 p.m. to 8 p.m. EST on Sunday night, right before the award ceremony begins at 8 p.m. EST. The red carpet show will be hosted by Scott Mantz, AJ Gibson, former Disney Channel star Laura Marano, and The Real co-host Jeannie Mai.

In addition to the live stream, the Golden Globes Facebook Page will also post exclusive live footage, including 360-degree videos captured at the event and other backstage content. On Instagram (@goldenglobes) you'll also find similar exclusive footage shared in real-time, and Instagram's official story (@Instagram) will also be run by Marano.

After the red-carpet show you can tune into the awards and see who walks away with a Golden Globe. Meryl Streep is once again nominated for a Golden Globe for her role in the film, The Post. Streep has the most Golden Globe nominations ever with 31 nods under her belt total and eight wins. This year she's up against Jessica Chastain, Sally Hawkins, Frances McDormand, and Michelle Williams in the Best Performance by an Actress in a Motion Picture — Drama category.

Also in film, many are interested in seeing whether or not Get Out wins in the Best Motion Picture — Musical or Comedy category, particularly because most fans felt it was unjustly put there. Regardless of the controversy, many are hoping the film's star, Daniel Kaluuya, wins the award for Best Actor in the category, though he has some tough competition. He'll be going up against Steve Carell, Ansel Elgort, James Franco, and Hugh Jackman.

On the TV side, the drama category this year is fierce with The Handmaid's Tale going up against The Crown. Although The Handmaid's Tale beat The Crown for an Emmy last year, it was The Crown that won the Golden Globe in 2017. Also in the Drama category are Stranger Things, This Is Us, and Game of Thrones. While Game of Thrones is popular at almost every other awards show, it's never been popular at the Golden Globes, only garnering seven nominations and one win since its premiere back in 2011.

In the TV comedy category, there are two newcomers, The Marvelous Mrs. Maisel and SMILF, which surprised many and it would be an even more welcome surprising if either show won. The two female led comedies are up against black-ish, Master of None, and Will & Grace.