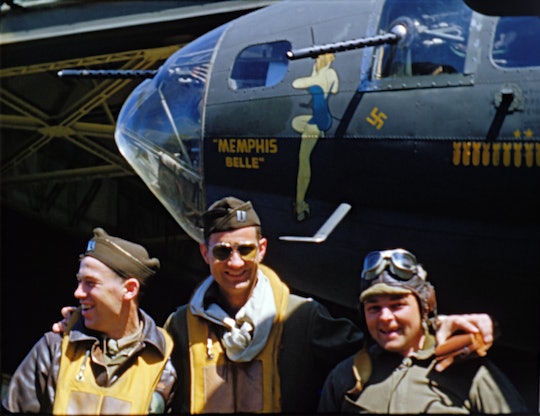 HBO is killing it with documentaries lately. The Case Against Adnan Syed, about the 1999 murder of a high school student and the subsequent arrest of her boyfriend, was released earlier this year. More recently, Foster, a doc about the realities of the foster care system in Los Angeles, came out, and now, The Cold Blue, about a World War II Air Force troupe, premieres tonight. But besides catching it live on HBO, people are going to wonder how to stream The Cold Blue. The documentary contains full restored footage from the 1944 documentary The Memphis Belle: A Story of a Flying Fortress.

When director William Wyler filmed the documentary, he got up close and personal with the men in combat from the Eighth Air Force and followed their everyday routines, including flying alongside them in actual battle. He was right there in the thick of it as no one had ever done before him. It was revolutionary for its time and now, people are going to see this footage for the first time ever.

The footage was recently recovered in the archives at the National Vaults and after careful restoration, there are outtakes, behind the scenes moments, and combat footage that shows what life was truly like for these soldiers during World War II. The Cold Blue also features present day interviews with the nine remaining members of the Eighth Air Force as they recall what they experienced with Wyler and his crew before Wyler's cinematographer was killed during a combat mission in a B-17 plane.

This new documentary is like watching the original with the DVD commentary, which gives it a lot more padding and allows viewers to see even deeper into the original filmmaker's vision.

The film will likely cover a lot of content so you may want to watch it again to really be able to appreciate all of the formerly archived footage. The Cold Blue premieres tonight on HBO at 8 p.m. ET. You can also watch it on HBO Go and HBO Now tonight at the same time. Afterward, on June 7, it will be available on HBO on demand.

Because The Cold Blue is an HBO documentary, it probably won't pop up on Amazon Prime or Fandango anytime soon. But if you have access to any of HBO's viewing platforms, you will be able to stream it to your heart's content.

Or, if movie scores happen to be your thing, the entire score to The Cold Blue is up on NPR's website to listen to right now. It's not the actual documentary by any means, but it can get you in the mood to appreciate the World War II doc and afterward, you can go back to stream it again.

Regardless of how you watch The Cold Blue or when you catch it, it really isn't one to be missed. The never before seen footage places the viewer in the cockpit of an actual fighter jet as Wyler and his crew did decades ago to really give you a firsthand experience. It is easily one of the most immersive and poignant World War II documentaries out there and the documentary alone is an important piece of history.