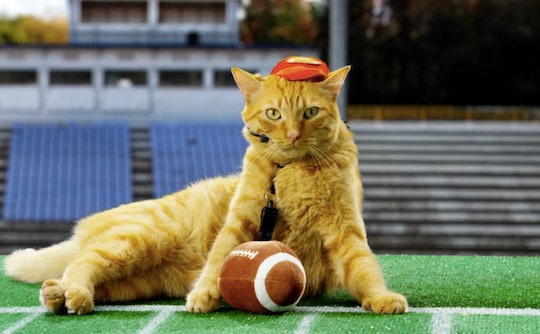 How To Stream The Kitten Bowl, Because You Need More Adorable Animals In Your Life

This headline might have just made your dreams come true, because I knew my life got exponentially better when I realized such as thing as the Kitten Bowl exists. The Puppy Bowl I'm already very familiar with — that's Animal Planet's adoption event during which puppies run around in imitation of the Super Bowl, and which airs on the same Sunday afternoon. But, somehow I missed the memo about the Kitten Bowl (maybe because cats have a bad rap for some reason unbeknownst to me, and don't pull the advertising dollars?). Who knows! But, obviously, the first thing I had to figure out was how I was going to stream the Kitten Bowl.

Womp womp... it's not being offered to stream online — but the Hallmark Channel is offering previews to the event, scheduled for Sunday, Feb. 7 at noon CT. The Kitten Bowl is in its third year, and also acts as an adoption event since all of the "cat-letes" are available for adoption, and adoption events are held all over the country, as well. The cute-a-thon offers that perfect alternative for those of us sick of pretending to watch football and who aren't much of a dog person, either. Think tiny fluffy kittens running around a mini-gridiron, mewing and tinkling their little bell collars. Wait, just see for yourself:

OK, OK, I promise ... you can make it until Sunday. But only because Hallmark Channel somehow anticipated adoring kitten fans and gave us all kinds of ways to pass the time.

First, you can go through the Kitten Bowl cat-lete lineup for the big game and pick your favorites. But, I'm sure your own four-legged friend is a star, too. Hallmark thought of that, too. Click on over to Hallmark's Cat-lete Card Creator, and complete a Kitten Bowl player's card for your pet.

Oh, and there's a KittenCam. Oh yes, you can watch all of the cat-letes play around and jump on each other, and do all those other things that make kittens the best. And there's something I'm not telling you (mostly because I'm trying not to think about it, considering I want all of them) — all the kittens on the live feed are available for adoption at North Shore Animal League America, the worlds largest no-kill animal shelter in Port Washington, New York.

Sunday's event will be hosted by Beth Stern, animal activist and radio host Howard Stern's wife. During last year's Kitten Bowl, she managed to help find every single kitten in the game a home. "It’s really incredible," she said in an interview with Newsday this week. "We have these kitten parties across the United States with all of our partner shelters. For the last two it has resulted in over a thousand cats, dogs, puppies and kittens adopted because of our Super Bowl parties at our partner shelters. Pretty awesome, right?"

Shelters all over the country are holding Kitten Bowl Adoption Event Parties leading up to this weekend's game.

So... Which Kitten Bowl contender has your vote?