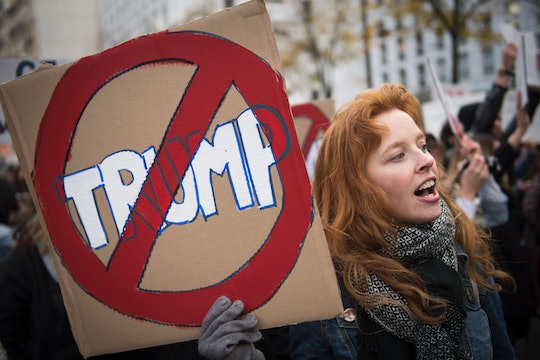 How To Stream The Women's March On Washington

On the day after President-elect Donald Trump's inauguration, thousands of people will take to the streets of Washington, D.C. to protest his presidency. People are taking buses from across the country to take a stand, and according to The New York Times, authorities are expecting up to 400,000 demonstrators. Sister marches will take place around the world, as well, with protests cropping up both across the United States and further abroad. If you can't attend but you'd like to witness the happenings, here's how to stream the Women's March on Washington.

So far, no outlets have said that they'll be live-streaming the protest — but you can bet your bottom dollar that the march will receive national attention, and most large broadcasters should be covering the event on Jan. 21. Besides the sheer size of the march, several celebrities have already said they'll be attending the Women's March on Washington, including America Ferrera, Scarlett Johansson, Amy Schumer, Zendaya, Frances McDormand, and Uzo Aduba. According to Salon, organizers have also said that celebrities like Katy Perry, Julianne Moore, Cher, and Debra Messing will also be involved in the march. (The number of celebrities attending the march stands in seemingly stark contrast to the number of celebrities willing to play at Trump's inauguration.)

Those who want to catch the action despite their lack of cable (I'm looking at you, Netflix generation) will definitely be able to see live-streams on Facebook, Snapchat, and Instagram as participants march through Washington. The official Women's March on Washington group goes by the handle @womensmarch and can be found on Facebook, Twitter, and Instagram. They will be posting updates throughout the day, and likely plenty of media. In order to find videos and photos posted by attendees and news media, search for the hashtags #WomensMarch, #WhyIMarch, and #IMarchFor.

"We’re doing it his very first day in office because we are making a statement,” organizer Breanne Butler told The New York Times in November. "The marginalized groups you attacked during your campaign? We are here and we are watching. And, like, ‘Welcome to the White House.’"

Welcome, indeed — the sheer size of the march should make for quite a striking visual, and judging by media coverage so far, much of the United States will be watching the march unfold. So don't worry: as Jan. 21 approaches, there should be plenty of ways to tune into the event, whether through media live-streams or endless Instagram updates. Either way, the world will definitely be watching.