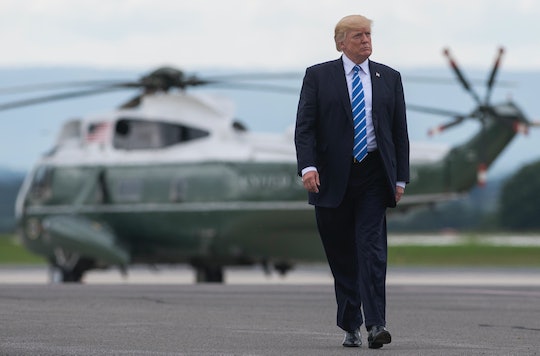 How To Stream Trump's Address On His Plans For Afghanistan

On Monday night, President Donald Trump's update on America's involvement in Afghanistan and South Asia will reach the masses via a primetime televised address. As this is a message you won't want to miss, here's how to stream Trump's Afghanistan address and what details to watch out for within the rhetoric. While address will be held at Fort Myer in Arlington, Virginia, viewers can live-stream the event from anywhere in the country.

With Monday's address comes the anticipated announcement of the "path forward" in Afghanistan, including the expected deployment of an additional 4,000 U.S. servicemen and women to the duty location, according to CBS News. The added force is reportedly in response to requests coming from commanders in the field requesting assistance. Another expected topic of discussion will be the means of terminating Pakistan's current status as a safe haven for terrorists, as CBS News reported.

In preparation for the address, the head of U.S. Central Command, Gen. Joseph Votel, as TIME reported, traveled to both Afghanistan and Pakistan over the weekend. Also, Trump and the national security team gathered at Camp David on Friday in order to plan the necessary military strategy that will be put in place for the region.

And on Sunday, Defense Secretary Jim Mattis spoke with reporters and said that the president "wanted to talk to the American people" personally, according to CBS News. Mattis has also reportedly weighed in on upcoming plans for Afghanistan. According to the Associated Press, after traveling to the country over the weekend, Mattis stated his satisfaction with the Trump administration's strategy for future dealings, but declined to comment on the specifics prior to Trump's address on Monday.

As pointed out by the AP, Monday will serve as Trump's first formal address as president. It comes in the wake of his period of seclusion following the outbreaks of violence in Charlottesville, Virginia. For those interested in hearing what the president has to say, a number of news outlets will be providing live-streams of the address.

Of those online source for the address live-stream, the most notable include TIME's Watch Live site, CBSN's Live Online Stream, and White House Patch. Each of these sites will provide real-time streams of the event.

Additionally, many local television stations will be broadcasting the event. Viewers wishing the watch the address this way should refer to their local listings.

There will be plenty of reasons to catch the address, not least of which is the impending deployment of additional troops to Afghanistan. Members of the public as well as elected officials have a number of questions and concerns about strategy in the country that the president hopes to answer. Virginia Sen. Tim Kaine, a member of the Foreign Relations Committee, has stated that he has more interest in the big picture plans for Afghanistan than troop numbers. While on CBS' Face the Nation, the senator said:

For answers to these questions and more, viewers can live-stream Monday's address online, watch it on television, or catch one the many re-cap programs that will surely be posted shortly after its conclusion. But, no matter how you choose to watch, the address holds critical information that shouldn't be missed.