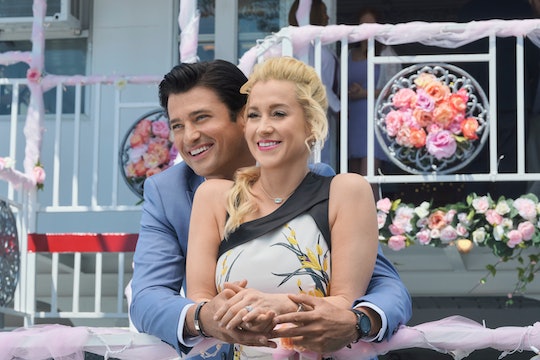 Summer is here and you can celebrate by watching one of the many amazing new movies Hallmark is airing as part of their “June Weddings” lineup. The first movie of the month is Wedding At Graceland, the highly anticipated sequel to Kellie Pickler’s Christmas At Graceland. If you’re hoping to dive in to the summer love stories on your streaming or mobile device, you should know how to stream Wedding At Graceland.

The movie is set to premiere on the Hallmark Channel on Jun. 1, but if you’re not watching it air live on cable TV, you can download the Hallmark Movies Now app to stream it. According to Hallmark, the app is available for all kinds of internet TV devices, including Roku 2, Apple TV 2, Amazon Fire TV, Chromecast, Android TV devices, and Samsung TVs. You can also download the app from the Google Play Store and the Apple App Store to watch the movie on your phone or tablet.

In a press release, Hallmark revealed that Kellie Pickler and Wes Brown will reprise their Christmas At Graceland roles as Laurel Couper and Clay Sheppard. The film picks up months after the couple’s Christmas romance, and follows them as they plan their summer wedding at Elvis Presley’s Memphis home. However, things don’t go as smoothly as they planned. Initially, the legendary Graceland venue they want is unavailable, but then, a last minute wedding gets cancelled, so they are finally able to book it.

But it’s the in-laws that create the bulk of the drama in Wedding At Graceland. When Laurel and Clay call their parents to tell them about the wedding, both families show up early to help with the arrangements. Clay’s mom and dad, Trish (Elizabeth Becka) and Tyler (Rob Moran), are excited for the wedding, but they want everything to be perfect. On the other hand, Laurel’s dad, a retired military man who is referred to as The Major (David Keith), is weary of the union, but pretends to be happy for his daughter.

“From the moment they arrive and take over the wedding planning, the Sheppards and the Coupers are like oil and water,” reads the Hallmark synopsis for the film. “Trish insists on a pull-out-all-the-stops affair with lots of glitter and glitz, while Laurel’s stepmom Isabel pushes for understated and elegant. The two clash on absolutely everything, from the bridal gown on down to the napkins. The dads are polar opposites as well. Tyler is a fun-loving, outgoing man who has complete faith in his son’s choice to work in the music industry, while The Major is a man of order and strategy who can’t understand how Clay can support a family in his line of work.”

Along with the romance, family drama, and beautiful summery sets, you can expect to hear a lot of old’ time rock and roll throughout the film. According to Hallmark, country music singer Lee Brice will guest star and perform a classic Elvis song, and Elvis’ daughter, Priscilla Presley will make a cameo appearance as well.

Wedding At Graceland premieres on Saturday, Jun. 1 at 9 p.m. ET on the Hallmark Channel.