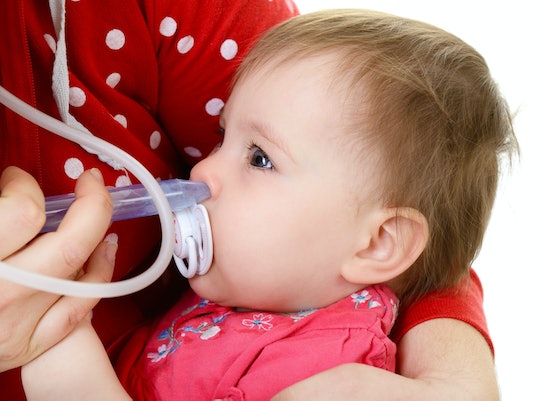 There's nothing more miserable than a baby with a stuffy nose, except maybe the parents of a baby with a stuffy nose. They can't eat, they can't sleep, they can't breathe (but boy oh boy, they sure can cry!). That's why most of us will try anything to get those tiny nostrils clear, like the increasingly popular Fridababy NoseFrida nasal aspirator. But how exactly do you use the NoseFrida Snotsucker? It's a curious contraption.

The good news about the Snotsucker is that you don't have to actually insert anything into your child's nose, unlike the rubber bulb syringe you probably brought home from the hospital. Right off the bat, that's a huge plus to nervous new parents (and, come to think of it, babies are probably fairly relieved about that part, too). Plus, you get to avoid the none-too-pleasant task of trying to get all that gunk out of the bulb afterwards. Of course, the Snotsucker still requires some cleaning, and you do have to figure out how to use it. The process might sound sort of complicated at first, but once you get the hang of it, you'll be on your way to relieving the worst of your baby's congestion in no time. The worst part is, they have no idea why they're so uncomfortable — as far as they know, they'll never be able to inhale through their nose again!

So, let's say your little one comes down with a cold and you go out and pick up a brand new Nosefrida Snotsucker ($15, Fridababy). What happens next? First, make sure the disposable hygiene filter is in place, right where the snot-collecting chamber meets the straw. This prevents bacterial transfer and from the snot shooting into your mouth. Next, place the large tube against (not inside!) your baby's nostril. This should create a seal. Then, with your mouth on the red mouthpiece, suck out the snot. (We know, that sounds pretty gross, but don't worry — that trusty disposable hygiene filter will keep anything but air ending up in your actual mouth.) Once you're done, just toss the filter (the Snotsucker comes with replacements, and you can buy them separately), wash the large tube with warm, soapy water, and clean the thin tube with rubbing alcohol. When the pieces are dry, just snap them back together. Don't forget to insert a new filter for next time. You do not want to use the Snotsucker without it.

It's all pretty straightforward, but just in case you're confused, there happens to be a really cute video explaining the process.

Another cool thing about the Snotsucker is that it's actually dishwasher safe, so you can feel confident about getting it super sterile. And it's definitely much easier to sterilize, let alone clean, these over the bulb aspirators (how do you get in there, anyway?). The Snotsucker also has the benefit of being consistently well reviewed, with Amazon reviewers giving it an average of 4.6 out of 5 stars and raving about its effectiveness:

"I was hesitant to try it out but was desperate to clear out my newborns plugged up nose! I am 100% satisfied with this product," wrote one satisfied customer. "I absolutely recommend this to all parents any chance I get!!"

"We love this product," wrote another parent. "Our infant doesn’t scream with this as she did with the bulb suction and it seems to work better too."

As much as you might come to love this product though, as with any gadget, make sure you are using it with caution. You might be so convinced of it's effectiveness, that you go gangbusters on removing the snot out of your baby's nose multiple times throughout the day. However, there is actually a limit to how much you should interfere when it comes to clogged sinuses, and you shouldn't be using it more than 2-3 times a day.

Sometimes, all it takes to make parenting a zillion times easier is a relatively simple invention and some good street cred from fellow mamas out there. This is one of those times, and one of those inventions, clearly. And if there's anything out there, anything at all, that has the potential to make cold and flu season a little easier for parents and babies, then it's worth a shot!

More Like This
How To Get Boogers Out Of A Baby's Nose
Here’s Your Guide To Paced Bottle Feeding
A Guide To RSV In Toddlers
Is It Safe To Take Benadryl While Breastfeeding? An Expert Explains