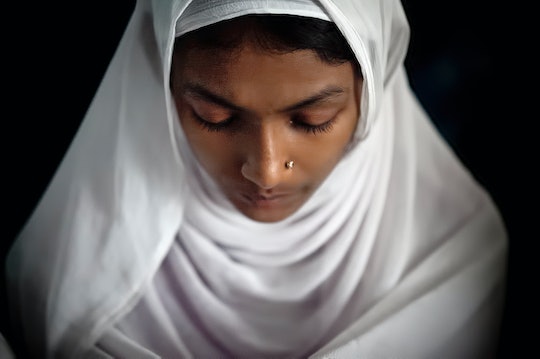 How To Support Muslim Women's Day

Monday, March 27, was declared the first ever Muslim Women's Day, and social media was awash with posts celebrating individuals and organizations who are part of the Muslim community. While it could definitely be argued that a day to celebrate women in the Muslim community is long overdue, the timing is certainly part of a larger response to the current sociopolitical climate. Here's how you can support Muslim Women's day both online and off — and not just for one day, either.

Throughout the U.S. and the world, the Muslim community has been targeted politically and become vulnerable to hate crimes, in large part due to the activities of Islamic extremists. Even though these violent groups are on the very fringes of the Muslim community — and in fact many of Muslim faith openly denounce them — Islamophobia continues to flourish. In the United States, 48 percent of Muslim Americans reported they had experienced religious discrimination in 2010, according to Gallup data. Of Americans polled by Gallup, one-third reported an "unfavorable" opinion of Islam — even among those who reported they had no "personal prejudice" against those of Muslim faith. For Muslim-American youth, the prejudice often begins in school, and it doesn't come just from their peers: of Muslim children who reported bullying, 1 in 4 said it had come from a teacher or another adult at school, according to data from the Institute of Social Policy and Understanding.

There's no sign of the political climate cooling any time soon, so supporting members of the Muslim community today — and every day — will continue to be crucial. If you're not sure where to start, either for #MuslimWomensDay or allyship in general, here are a few ideas.

If you have any kind of social media platform at all, recognize opportunities to elevate the stories, perspectives, challenges, and voices of those in the Muslim community. Whether you follow individuals or groups who are sharing stories from within the Muslim community and retweet to your community, or engage in conversations or chats, there are lots of ways to use social media meaningfully. Websites like MuslimGirl are already raising the voices of Muslim women all over the world.

Being supportive also means not turning a blind eye to the abuse and hate that many people in the Muslim community — especially women — experience both on the internet and off. While it might seem futile at times to report anything to Twitter, if you witness Islamophobia in action, report it. Reach out to individuals who are under attack and ask what you can do to help. It may be that you can't do anything in the moment other than report the abuse and let the person know that you've got their back.

One of the primary reasons that Islamophobia is so rampant is that so many people don't understand the Muslim faith and blindly attribute the behavior of extremists to the entire religion. Islam, like all organized religions, has its own set of beliefs, practices, customs, and culture that may be very different from yours. Don't expect members of the community to educate you — take it upon yourself to do the research. The Qur'an is the holy book of Islam and much in the same way The Bible informs Christians, it provides the faith's teachings and is regarded as the word of God.

According to Pew Research, Islam is the world's second largest religion after Christianity, and it's expanding fast. The vast majority of those who practice are not members of any terrorist group, nor do they support the activities of those groups, according to data from the Centre for Research on Globalization. That being said, you should also take it upon yourself to understand how extremist groups like ISIS have evolved, and the ways in which their beliefs and activities do not reflect the Muslim faith.

In addition to spreading the word and educating yourself, you can also support organizations and advocacy groups that protect the Muslim community. Organizations like the ACLU, Muslim Advocates, the Muslim Public Affairs Council, and the Muslim Legal Fund of America work to help anyone of Muslim faith who has experienced discrimination and needs legal representation. Many of these organizations are also on social media, which makes it easy to keep up with their news and calls-to-action.

Whether you're using your social media platform to elevate Muslim voices, donating your time, skills, or money to advocacy, or committing to calling out prejudice, there are a multitude of ways to support Muslim women — not just on a specific day, but every day.